Duty is moral or legal obligation of an individual or subject.

When you say “I am doing my duty”, it just means that you are doing your Dharma. Duty and livelihood are different things. While work and livelihood defines what an individual does to make ends meet, Duty is something which the individual performs on a broader level. It is the “subjective” cause that defines what duty is all about.

Duty is not at all related with the karma or the work performed. Duty is subjective and attached to the subject alone. Karma is objective while duty is subjective. Let’s take a few examples.

When a soldier patrols the border of his country, he is doing his karma. That is his job for which he is paid a salary. When this soldier spots an intruder and takes a decision – “Whether to shoot or not to shoot”, he is performing his duty (a moral obligation). If he relentlessly shoots the intruder without even thinking why he is shooting, he fails to perform his duty. His duty is not to relentlessly fire his weapon for the job he is paid for. His duty is to understand the responsibility that comes with power, evaluate the situation and then use the power he has been given.

So in this example, the duty is not to fire the weapon. The duty is to decide whether to fire or not.

An organization is struggling to make profits and could not give enough appraisal to all employees. The organization had to let go of some employees since most of the employees work for money (livelihood) and they decided to replace their employer. However, one employee decided to stay. He took the load of other employees on his shoulders and started stretching long hours, so that the organization can make more profits. Onlookers called him foolish for staying with an organization that did not do yearly appraisals. But this man knows his duty well and he is not driven by the objective results of performing his duty.

In the Kurukhestra war, Krishna tells Arjuna to perform his duty. Arjuna fails to recognize his duty. Arjuna focuses on the Karma alone – the destruction of his own relatives, brothers and kingsmen. Arjuna says that by performing this karma, he will incur a sin. Krishna tells him that Duty is above and beyond Karma. Duty is primary, karma is secondary.

To give an objective definition to duty is nearly impossible, since duty begins and ends with the subject and his situations.

What is my duty?

When you say “What is my duty?”, a natural question follows

Who are you? And what is your Truth (Dharma)?

Unless you know who you are, you will never know your duties. Unless you are aware of your subjective truth and Dharma, you can never be dutiful. Most people don’t know who they are and hence they are hopping from one thing to another thing to another, ending up in circles. They chase useless things in life for temporary pleasure and when pain comes as a consequence, they feel dejected and defeated. This phenomenon certifies the non recognition of duty, since a subject who recognizes his duty can never be sad or defeated by circumstances.
In the Mahabharata war, Krishna tells Arjuna 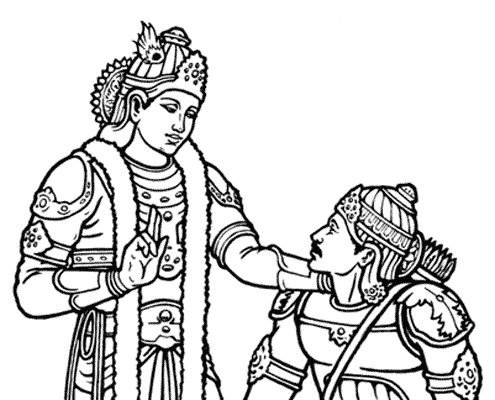 You are foolish and deluded. You think that by not killing these people, you are doing someone a favor. Please note that you are a nobody, you are just an instrument of Dharma. Dharma has chosen you to perform a task and you are not recognizing your duty at this point. Compared to you, I salute Yuyutsu, at least he is aware of his duty and has joined the camp of Dharma by recognizing to let go of his kingdom and brothers. You are a brave person but at the same time, you are illusion-ed by your definition of Karma. You  are giving preference to Karma and ignoring the duty while Duty comes first and Karma follows the path laid out by duty. Identify your duty first and then perform your karma, that way you will never incur sin.

Ego is the enemy of Duty

I am the manager, my karma is to manage people. I am not here to do mundane work, the organization should hire someone to do that.

I am the working son and I earn livelihood for my family. Hence, it is not my duty to do daily household chores for my parents, the non working brother should do it.

I am the student (Arjuna) and it is not worthy of me to kill my teacher (Drona). That way I will incur sin, please fight the war on behalf of me and restore Dharma ~ Arjuna to Krishna.

Non recognition of duty is observed when Ego takes over. People forget that the “I” doesn’t matter.

Once upon a time an ascetic went to a forest where he meditated and practiced Yoga. One day when he was in deep meditation, some dry leaves fell on his head. He looked up and saw that a Crow and a Crane were fighting on top of the tree. This made him angry.

How dare you disturb my meditation and throw these leaves on my head?

He glanced at them and burnt the birds down to ashes, such was his power.

Later, we went to the town to beg for food. He knocked a door and said

O mother, give me some food

A voice came from inside the house

Wait for some time, I will come.

The Yogi was again angry and said

How dare you make me wait? Are you aware of my powers? (again the ego is taking over)

The woman came out and said

Son, don’t think too much about yourself. I am neither the crow nor the crane.

Mother, how did you know that?

I am not a Yogi and I have never been through all that you have been through. However, all my life, I have observed my duty. I am a common everyday woman and my duty is to take care of my husband. This is my Yoga which I have been practicing all my life. I am aware of who I am and by doing my duty I have become illumined; thus I could read your thoughts and know what you had done in the forest. If you want to know something higher than this, go to the market where you will find a butcher who will tell you what “yoga” really means.

The Yogi went aroung the town looking for the butcher and found him. He saw the butcher is cutting meat with his knive which is a cruel act by his definition.

“Is this the man from whom I am going to learn? He is the incarnation of a demon, if he is anything.”

In the meantime this buther looked up and said,

O Swami, did that lady send you here? Take a seat until I have done my business.

In some time, the butcher took the Yogi to his home and gave him lessons on Karma yoga, observance of one’s duties.

The Yogi was astonished and said

Why are you in that body? With such knowledge as yours why are you in a buther’s body, and doing such filthy, ugly work?

No duty is ugly, no duty is impure. My birth placed me in these circumstances and environments. In my boyhood I learnt the trade; I am unattached, and I try to do my duty well. I try to do my duty as a householder, and I try to do all I can to make my father and mother happy. I neither know your Yoga, nor have I become a Sannyasin, nor did I go out of the world into a forest; nevertheless, all that you have heard and seen has come to me through the unattached doing of the duty which belongs to my position.

In this story, we see that the woman and the butcher are completely unattached to their duties while the Yogi is not. The yogi has ego sitting inside his head and this ego prevents him from self actualization and understanding. Although the butcher is doing work that is cruel, ugly and filthy, he is unattached and hence he is the one who has realized his duties. Although the woman is living in a mundane material life, she is aware of her duties and there is no ego. To the butcher and the woman, Duty is primary while Karma is secondary. But to the yogi, the karma is primary.

The yogi is taking a spiritual path but he has not gotten rid of the ego. His karma is attached and out of this attachment, anger is born and deludes him. He focuses more on the Karma (meditation, observance of god) and ignores the duties and hence, fails to attain his subjective truth.

Karma is secondary, duty is primary. No matter what path you take in life, observe the duty first. Recognize yourself first, then the duty and karma shall follow.