Mahabharata tells us the story of Bheema who is always angry over his enemies and wants to win them by force. He is impatient and not ready to realize his truth. He wants justice but is not ready to wait for the right time and place.

Bheema meets Hanuman in the forest who teaches him lessons on war strategy, winning the enemy with righteousness and sticking to the path of Dharma. Hanuman wanted to free his brother Bhima from his ego and to give him greater  strength to fight his enemies. 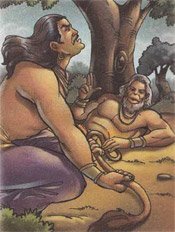 Pandavas were spending their time in exile, far off in a deep jungle. It was Bheema’s duty to patrol the area and get rid of wild animals who may attack during night. On one of his patrolling expeditions, he saw an old monkey with a long tail. Here goes the conversation

Bheema (in an angry tone)

Please get the tail out of my way.

Why are you so angry? Relax and take the name of Ram.

Please take your tail out of my way, it is an obstruction in my path.

I don’t care. if you want, try it yourself. Move the tail out of your way and move on.

Bheema then grips the tail with both hands and tries to move it. But the tail is ponderous and despite having the strength of a thousand elephants, Bheema fails to move the monkey’s tail. Bheema realizes that this is not an ordinary monkey.

I am sorry for my boyish behavior.

Why don’t you simply cross the tail and go about your business?

I can not. You are not an ordinary monkey. Please show me your real identity.

Hanuman then shows Bheema his real identity. He expands his size into a behemoth and Bheema appears minuscule in front of his dimensions.

You are my elder brother, why did you meet me like this?

I wanted to teach you that the weak also deserves your respect.

Just because you are powerful doesn’t mean that you have the authority to use it whenever you want to. I also wanted to teach you that truth is not what you see. The truth is greater than what you see, feel, hear or sense. You saw that an old monkey is challenging your strength and you accepted that challenge. You took this decision deluded by the illusion of strength.

Forgive me, I have learned my lesson here. Please come to our hut and bless my brothers. Teach us war strategy.

In the fight between right and wrong, always stick to the right one and keep it gripped with both hands. Soldiers fight from both sides but in the end, truth alone wins. Right now, you are holding on to your ego. Leave that ego aside and you shall be victorious. This is the ethics of war.

Will you not fight with us on our side?

No. This is not my war, this is your war. Besides that, this Yuga is not for me to fight, I have already passed my Yuga. This Yuga is yours. When you roar like a lion on the battle field, my voice shall join yours and strike terror in the hearts of your enemies. I will be there on the flag of the chariot of Arjuna .You will be victorious.

Hanuman teaches Bheema a valuable lesson – the value of humility and ethics in war. Bheema realizes that his strength and power should be used in the correct context and not against people who are weak.

After a few months, Bheema observes that a Daemon is intimidating to kill a member of a Brahmin’s family in the jungle. He goes there to see what this is all about.

Take me with you. As a Khastriya, it is my duty to protect the weak and as a devotee it is your duty to find a human for sacrifice. We are both tied by our duties.

Ghatotkacha is unaware of the fact that the man whom he is taking for sacrifice is actually his father. He takes Bheema with him and reaches home.

I have brought a human for sacrifice. Now the Goddess will be pleased.

Do you know whom you have brought with you? He is none other than the second Pandava Kunti putra Bheema. He is your father.

No. I am just a sacrifice which your son has brought to please the goddess. First sacrifice me and then you can tell him who I am.

How can I sacrifice my own husband to please the goddess?

You want to please the goddess, you should sacrifice your own son, husband and father first. Who gave you the right to forcefully sacrifice someone else’s husband, son or father? How did you assume that the goddess will be pleased with your sacrifice? Am I not worthy of a sacrifice just because I am your husband

Later Bheema tells Ghatotkacha that a deadly war awaits and one day he might need his help.

Bheema is the subject while Hanuman and Ghatotkacha are the objects that teach Bheema a lesson.

Bheema is the man, the present, the purush.

Hanuman represents the past, the past Karma, the history, the legacy. Hanuman is the Guru who shows Bheema the right path

Ghatotkacha represents the future, the outcome, the consequences and the result.

The subject (Bheema) is angry, misguided and lost in a jungle when he meets his “Guru” (hanuman). The teacher shows him the right path, tells him to curb anger and teaches him lessons. Then the subject (Bheema) meets his son (future) and propagates the knowledge to him. He tells Ghatotkacha that his act of offering the goddess is cowardice. He also requests help from his own son for the war that lies ahead. This shows that Bheema has curbed his ego and is not ashamed to ask help from his son.

Later in the epic, Ghatotkacha sacrifices himself to save Arjuna.