Shiva is a Tapasvi. Unlike Vishnu and Brahma, he is the one who has outgrown “Hunger” and “drive”.

Brahma’s drive is to create. He has hunger.

Vishnu’s drive is to preserve. He has hunger

Shiva has no drive. He is the greatest of Tapasvis and is mostly lost in his Tapasya. He is the “Ishvar” who has no hunger. He destroys when someone gets in his line of Tapasya.When the situation gets out of control and Vishnu cannot preserve it anymore, he seeks Shiva and pleads him to Destroy everything. Then Vishnu goes to Brahma and tells him to re-create.

Shiva resides in Kailasa, it is a snow covered mountain with no grass. Yet, Shiva’a bull Nandi doesn’t mind. Nandi is not afraid of Durga’s tiger. Shiva’s serpent is not afraid of Kartikeya’s peacock and neither is Ganesha’s rat afraid of Shiva’s snake.

In Shiva’s company, you cannot be hungry and you cannot have any drive. He is the yogi and not a Bhogi …. devo ke dev, Mahadev.Shiva’s eyes are almost always closed, for he has shut his eyes from the world and is realizing his inner self.

He is not bothered about anyone but if someone gets in his line, he wakes up from the Tapasya and starts dancing “Tandava” which causes huge destruction.

Hence, Shiva must remain high on Marijuana for if he gets up from his seat, trouble awaits. 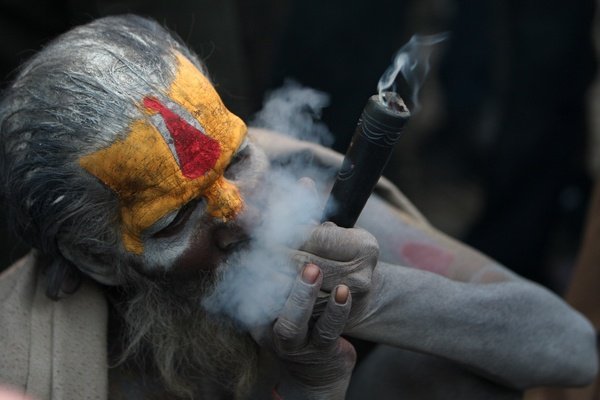 This theme of getting high on Marijuana shows the yogic nature of life, being reluctant of the external world and always “magn” with oneself.

If you have noticed the way of living of a “Shiva bhakt” you will see that most of them have covered their body with Ashes, they are mostly naked and they are high on Marijuana. They smoke weed and lie in the streets for months. They don’t bathe. They do not ask for alms, they do not ask for food, they do not ask anything. They have outgrown desires, hunger and are not craving for anything.