We have a question from Soumya

Why Bheesma did not allow Karna to fight under his flag? What is the real reason? Many texts suggest that Bheesma had severe clashes with Karna and he did not like him. Is that the real reason or is it something else?

It is true that Bheesma and Karna had conflicts in the past but this is not the real reason. The real reason is far, far more complex and I will explain the backdrop of this decision. I will present the logics first and throw some light into different point of view’s of decision makers.

Point of Views in Kaurava Camp

There are four decision makers here – Duryodhana, Shakuni, Karna and Bheesma. The entire plot of who shall become the commander in chief revolves around Arjuna

I have to win this war at any cost. The only barrier to me is Arjuna. I can tackle Bheema alone, so he is not a problem. Yudhisthir, Nakul and Sahadev – my 99 brothers will do that task. Drona will take care of Drupad and Dhristyadhuma, since he has personal enmity with the Drupad family. Abhimanyu is a kid while King Virat is an old man. Bheesma can take care of rest of the army.

Bheesma and Drona won’t kill Arjuna because Arjuna is their favorite. Only Karna can kill Arjuna and hence, I want Karna to be the commander in chief of my army.

My goal is to kill Arjuna. I don’t care who wins or loses this war, my only intention is to beat Arjuna and kill him to prove to the world that I am superior than him. I am using this war as a platform, that’s all. Bheesma and Drona will not kill Arjuna, that is good for me. This gives me an opportunity to prove my superiority over Arjuna.

My goal is to protect Hastinapura in long term, no matter who wins this war. Only six has the merit of saving Hastinapura from foreign intrusion

I am not going to live, there is Shikhandi in enemy camp, she is re-incarnation of Amba and I know why she is here. She is going to kill me and fulfill her prophecy.

Drona is not going to live either, there is Dhristyadhumna in enemy camp and he has been given birth for a reason. He is going to take vengeance of his father’s insult. So we can rule out Drona as well.

Krishna is not a member of Kaurava family and after the war is over, he will go to his own kingdom – Dwarka.

Aswathhama is good but he knows how to use Brahmasthra only once. Hence, I cannot rely on this fellow for long term security of Hastinapura.

Next remains Arjuna and Karna. At least one has to stay alive after this war, so that he can protect Hastinapura from foreign instrusion and possible destruction. Let me do an SWOT analysis and see the strengths and weakness of all the A players from both sides. 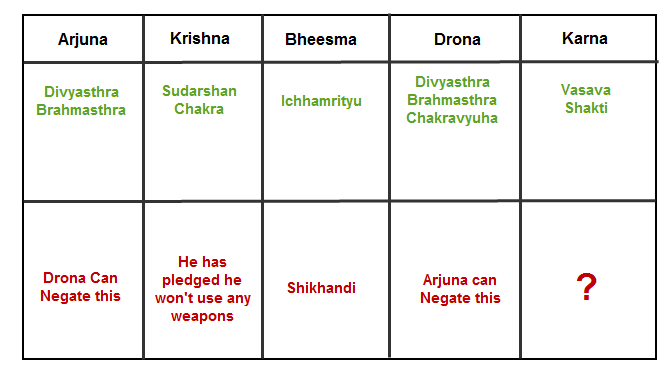 We can clearly see that every A lister has a counter and can be stopped.

We have already seen that at least one of Arjuna or Karna has to stay alive to protect Hastinapura in long term. If I let Karna fight, he will kill Arjuna for sure. If Arjuna is dead, Duryodhana wins and becomes the king. Karna is not a a member of the Kuru family and he will eventually leave, having settled scores with his arch rival Arjuna. Hence, Hastinapura is exposed to foreign attack which Duryodhana will not able to withstand in long term.

However, if Arjuna lives and Karna dies in the war, Yudhisthira will become King. This will  ensure Hastinapura always has Arjuna, who can protect Hastinapura from foreign intrusion.

Hence, for the sake of Hastinapura’s future, Arjuna has to live and Karna has to die.

So we can clearly see how Bheesma is thinking through the situation and takes protective measures to ensure a bright future for Hastinapura. It doesn’t matter who wins of loses this war, his objective is to protect Hastinapura and his decision is correct.

He prevents Karna from entering the war because he has to protect Arjuna and Hastinapura’s future. Here is what went in his head

I will be the commander in chief of this army. I will ensure that this war is lingered and goes towards a stalemate. I have Ichhamrityu, noone can kill me. Eventually both sides will get tired and will agree to a stalemate. If that happens, it is the best solution. Everyone lives and the future of Hatinapura is secured.

However, if a stalemate doesn’t happen and I am killed, Karna will enter the battle. Then Arjuna might get killed. There is nothing I can do and my vow of protecting Hastinapura is still upheld, since I have pledged to protect Hastinapura’s future so long I am alive. If I am dead, it is upto the Gods and Time to decide what is right for Hastinapura.

But so long I am alive, I have to protect Arjuna as he is the only one who is the suitor of my role – guardian of the throne where Yudhisthir  is worthy of sitting, not Duryodhana.

Bheesma convinces Duryodhana that if Karna fights this war, he will not enter the battlefield. It is upto Duryodhana to choose – he can either choose him or Karna but not both at a time.

Shakuni convinces Duryodhana to choose Bheesma citing the reason that it is necessary for Kauravas to destroy the army of Pandavas, which Bheesma alone can take of. Once the army is destroyed and Pandavas are weakened, then Karna can take over Arjuna.  But the reverse is not true.

Listening to the logic of both Bheesma and Shakuni, Duryodhana decides to keep Karna as “Reserve force” and appoints Bheesma as the commander in chief. Both Bheesma and Shakuni badly wanted this and they both smiled, because their “personal” objectives are fulfilled if Karna does not enter the war.

This is the biggest tactical mistake Duryodhana made. Had he chosen Karna as the commander in chief, Arjuna would have died on day 1. After Arjuna, Drona alone could have finished the rest of the Pandava army with his Divine weapons, there was no need of Bheesma to be used in the war at all.

Before the war started, Karna had told Duryodhana that he was doing a mistake by not allowing him to fight the war from day one. But since Shakuni and Bheesma had already convinced Duryodhana, he went with his conviction.

And he ended up losing the war.

So why Bheesma did not allow Karna to fight under his flag? To protect the future of Hastinapura, which is Arjuna, not Karna.

Conversation Between Bheesma and Karna on 10th Day

On 10th day of the war, Arjuna uses Shikhandi as a shield and eliminates Bheesma from the battlefield. Bheesma would not attack a woman and Shikhandi was a transgender individual.

While Bheesma lied in the bed of Arrows, Karna comes to seek his blessings

You did not allow me to fight the war under your flag. But now I am going to enter the war under the flag of Dronacharya. I have come here to seek your blessings, o Grandsire!

Hey Kunti Putra Karna, my blessings are with you. You know it well who you are and so do I.

If you knew my real identity, why didn’t you let me fight under your flag?

The second reason is that this war will see the deaths of many soldiers. I want both you and Arjuna to live. If you enter this war, either you or Arjuna will live. This is a great loss for Hastinapura. You both are brothers and both of you will end up hurting each other. If you have to fight, you should fight for Dharma, you should fight with Pandavas.

O Son of Kunti! Thou shall choose the path of Dharma over anything else. If Dharma tells you to abandon your wicked friend who helped you at some point in time, thou shall follow that path. But alas, you are blind. To you, Duryodhana’s debt is a higher priority than Dharma and hence, I cannot give you the blessing of victory. This land will never see a warrior like you ever again and it is my request to you that you do not fight this war. If possible, avoid it and go your own way. Do not fight your brothers and shed unnecessary blood. This land needs both you and Arjuna, do not fight a meaningless war, O surya putra!, Do not fight a meaningless war.

O Grandsire! I understand what you are trying to say and I respect your words. But let me tell you something which I haven’t told anyone, not even Duryodhana. My real fight is with myself, not Arjuna or anyone else. Duryodhana is just providing me a platform. I have always failed to prove myself over Arjuna and time and time again, I have lost the battle with myself. I have always questioned time who I am and I got the answer in this Kurukhestra, when there is no way to go back and change the past. I have been humiliated time and time again of being a person of lowerly caste, but in reality, I am a prince, the eldest son of mother Kunti. I have been humiliated time and time again that I cannot beat Arjuna – Draupadi’s swayamvar, Virat battle and so many other ones.

Hence, this is the final episode which I have to try. The battle I am fighting is with myself, not with anyone else. I have to fight, for this is the battle I have dedicated my entire life for. If I move away from this battle, history will call me a coward. And above all, I will not be able to forgive myself. Hence, O grandsire, do not give me your blessings but do not further weaken my heart, for I have to go, for my own sake.