We have a question from Divyanshu,

How would a person’s Karma exactly be defined? Is it the external bodily action/reaction to a situation or is it much more complicated. There also have been various citations where Karma is referred to as the internal state of joyfulness while performing an action. Please throw some light to it.

Karma originates from the Sanskrit word “Kri”, which means “To do”. Any action is “Karma”. Likewise, “Inaction” is also “Karma” since Inaction is also some sort of action whose magnitude is Zero.

There is a place called “Batal” in the Himalayan Spiti valley region where a Gentleman and his wife (fondly called as Chacha- chachi) has been serving people since 50+ years. There is not a single petrol pump, any hotel, restaurant or sign of human habitation and the only re-course available is this couple who prepares food and provide shelter to tourists. 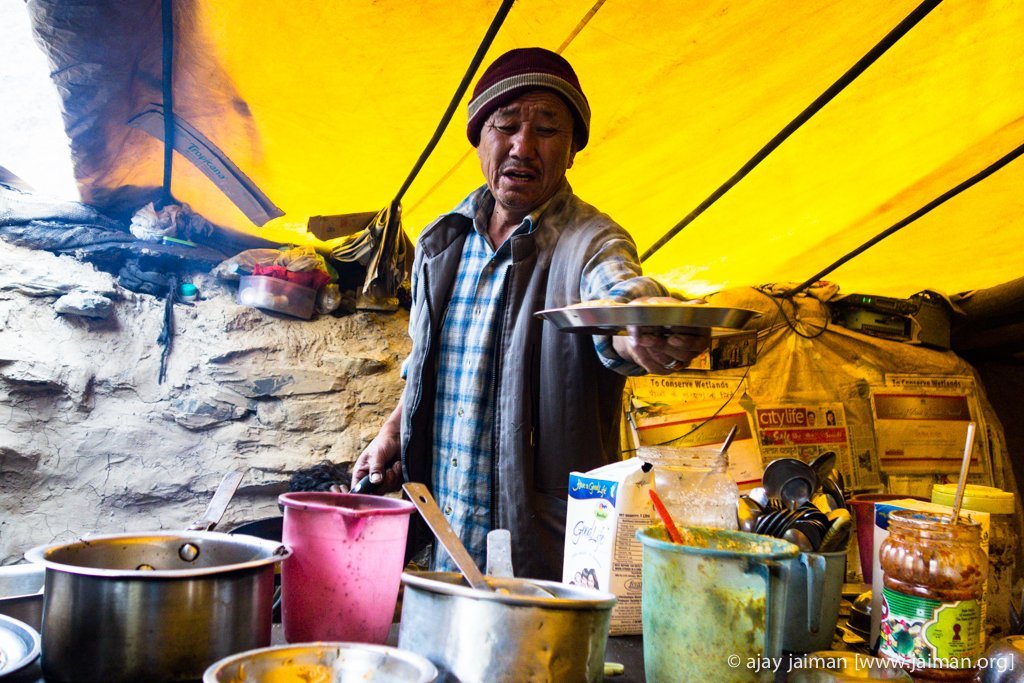 I have personally visited this place and have eaten Ramen noodles in his restaurant.

This gentleman has been doing the same thing for 35 years in a mountain with no human habitation and helping tourists with shelter and food. He is doing the unthinkable,  and why do you think he is doing it?

Why do you think he is doing it?

He is doing it because he has identified his Dharma – serving human lives. Hence, his Karma is rock solid, he is doing that thing for 50 years, every single day without fail. He has achieved his object of human pursuit (also known as “Purushartha“.)

If there were any other motives, he would have diverted but since he has found his object of human pursuit, he is doing that thing for decades. His Karma has been defined, his objective and pursuit fulfilled.

How did he achieve his definition of karma?

He observed that there is no shelter in that region and tourists face lot of difficulties with food and shelter. He found that lot of people died out of winter storms, and he decided to do something about it. He found his definition of “Dharma” through that act and has stayed in that course ever since.

You might not have found your definition of Karma yet, which is why you are fluctuating in your “Karma”. Your action is not concentrated, since you have not found the object of human pursuit yet.

Unless you know the “Why?”, you will forever be entangled in this circus of life and never know what you are supposed to do. What is your Dharma and Karma? Compared to you, the gentleman whom I cited is living a life worth living because he has found his “Purushartha”, while you have not.

Does that mean you find a place in Himalaya, build a restaurant and stay there for 50 years? Will that help you achieve your Dharma?

Knowledge of Dharma comes from Inside, not outside

No knowledge comes from outside; it is all inside.

Was it sitting anywhere in a corner waiting for him? It was in his own mind; the time came and he found it out. All knowledge that the world has ever received comes from the mind; the infinite library of the universe is in your own mind.

The external world is simply the suggestion, the occasion, which sets you to study your own mind, but the object of your study is always your own mind. The falling of an apple gave the suggestion to Newton, and he studied his own mind; he rearranged all the previous links of thought in his mind and discovered a new link among them, which we call the law of gravitation.

It was not in the apple nor in anything in the centre of the earth. What Newton did to Gravitation is the same what the Gentleman did to Chandra Dhaba in Batal — looking into his own mind and figuring out the Dharma.

All knowledge therefore, secular or spiritual, is in the human mind.

Similarly, the knowledge of what is my Dharma is also in my own mind. The external world is just an instrument, a platform to discover and establish my Dharma.

Unless you know your Dharma, you will never be able to define Karma. There are four basic building blocks of Purushartha 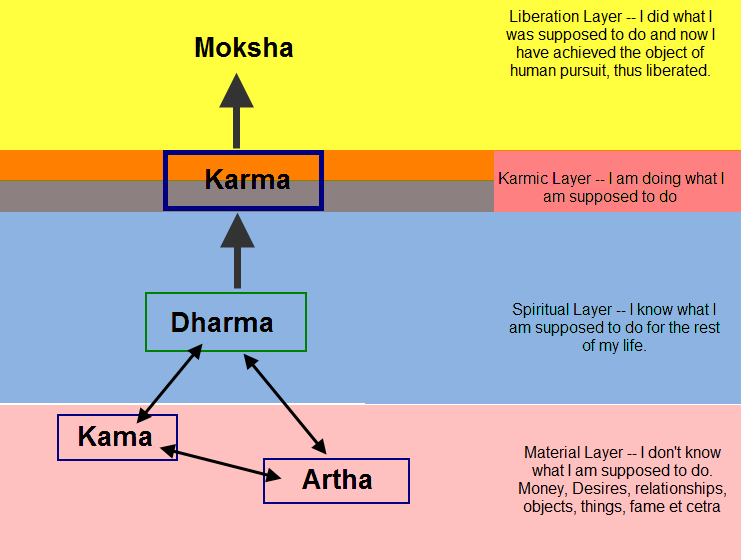 First layer is the Material layer, where you don’t know the object of your human pursuit. This layer contains worldy desires like money, property, relationships, knowledge, fame, well being and so on. You are entangled in this material layer.

Does that mean Dharma does not exist in Material layer? It does.

But that does not necessarily mean that studying or working is the object of your pursuit. It is possible that the object of your human pursuit is something pretty vague – e.g cleaning dishes in a restaurant. You will dismiss this because you think that is not the objective of your human pursuit and move on to other things. This happens because our brains are wired to think materialistically in the “Material layer” ( e.g I will get that degree because it gives me a great job)

This is the layer where you discover what is the object of your human pursuit.

This is that phase when you finally figure out what you are supposed to do for the rest of your life. 99% of the people never reach this layer because they are so entangled in the material layer, they never uplift themselves to the spiritual layer.

They spend their entire lives in pursuit of money, business, property, fame, relationships that they never discover this layer at all and die. I have previously discussed this in a post – stages of human consiousness, I urge you to read this first to understand the five stages of human consciousness.

People who never cross the third stage of “Manomaya” and enter the stage of “Vijnanmaya” cannot enter spiritual layer and hence will never know what their Karma is supposed to be.

Example – Colonel Sanders, the founder of Kentucky Fried Chicken entered his Karmic layer at 67 when he realized that his object of human pursuit was to cook fried chicken and provide mankind with great recipes. He was entangled in Material layer till 67 and only realized it at when he was 67 years old.

The Karmic layer stands at the juncture of Spiritual layer and the layer of liberation. It is through work one transcends from the spiritual layer to the liberation layer.

Once the subject who has realized the object of human pursuit, follows his Dharma, performs his Karma, he is liberated forever. This is the “Anandamaya” phase which is an internal state of joyfulness while performing an action, as you have mentioned in your question. This is the stage when nothing matters to the subject and he continues to fulfill his Dharma through Karma (action) and is liberated in the process.

This is the fifth and ultimate sheath – Anandamaya, where no grief can touch the subject, nothing matters and he is forever content, happy, his objective realized and his purpose fulfilled.

Update: A Counter Example Where Karma is rejected in favor of Object of Human Pursuit

One of the readers (Lovely Gautam) commented that all the examples are materialistic in nature. That is correct. The reason I have given materialistic examples because people can relate to them easily in their day to day lives.

To look from a non materialistic lense, let me cite a counter example of a Movie scene which is based on a real life event – the story of a great pianist Władysław Szpilman and his struggle for survival when Germany ruled Poland and were exterminating Jews in Warsaw ghettos. This is a counter example in the sense that both subjects overlook their karma to focus on the duty, the bigger cause. I have previously explained this in a post why karma is secondary while duty is primary.

There is a scene in the movie where a German officer (Hosenfeld) finds a Jewish pianist (Szpilman )in his hideout in an attic in Poland. This scene is a good example of the portrayal of Karma for both subjects. I will discuss the “Karma” and “Duty” part of it later, after we have seen the scenes given below

Let’s closely look at the situation of both subjects.

Władysław Szpilman is desperately struggling to survive. He has nothing to eat, nowhere to live, no shelter, his family is dead and he is a Jew whom the Germans are hunting down and brutally killing without a second thought. He is a well known pianist in Poland and this helped him find some well wishers who helped him hide but not for long. Poland is breaking down under the Nazi jackboot and this is a phase wherein every man is on his own.

So at this time, what is his Karma? His karma is to

Szpilman did assist in the Polish rebellion by supplying arms inside the ghetto while working in a labour camp but he did not fight opposite Germans directly as a rebel.

Wilm Hosenfeld is a German officer who has orders to execute Jews in Poland and specially those who are living inside the Ghetto. The Germans are losing the war and hence aren’t allowed to show any mercy towards their enemies on all fronts.

So at this time, what is Hosenfeld’s karma? His karma is to

Hosenfeld knows very well that this man is a Jew who had been hiding inside the ghetto for long and has not been captured by German army yet. He also knows that this man must have used unauthorized help to hide himself (which makes him a bigger offender as per German code of conduct at that time). Yet, he asks Szpilman his whereabouts, where he worked and requests him to play the Piano. Later on he brings food for Szpilman and even offers him his own coat for warmth.

Why do you think Hosenfeld decided not to arrest or execute Szpilman but help him hide in the attic. What could have made him take this decision?

He took that decision because he realized his “Purushartha”. He ignored his Karma of “Killing and executing jews” and focused on the bigger purpose – protecting a man with talent and offering him help so he can survive. He knows his “Karma” of a soldier but at this point of time, he decides to look beyond his Karma and focus on the “Purushartha” instead.

The same applies to Szpilman after Poland was liberated. Hosenfeld was captured in a POW camp and one of his musician friends told him that a German prisoner in the camp names his name for help. Szpilman immediately rushed to the camp to inquire about the German officer, although Poland was liberated and he had nothing to do with anyone related to the war. But he still went to check the German officer there to see if he could have helped him rescue from the POW camp. He couldn’t but at least he tried and cared to pay a visit.

This shows that Szpilman also looks beyond his Karma. He lost his family, his job, his house, everything to the Germans and yet after all the debacle and horrifying experience of surviving the holocaust, he is not bitter towards the Germans. He goes to that place where the POW camp was in the hope of liberating an officer from the same German army, who killed his family and destroyed his country. This shows that Szpilman also recognizes the object of human pursuit and looks beyond the usual definitions of Karma. He focuses on “being good” and “doing good” even if the receiver is someone from the enemy camp, just as Hosenfeld did.