Before going into the symbolism of Draupadi being married to 5 Pandavas, lets read some “itihaas” (history) and try connecting the dots.

Drupad was humiliated by Drona, his land was taken and he was made captive. To avenge this, he gave birth to a son (Dhrishtadyumna) who would kill Drona and a daughter who would enter the Kuru family and divide it.

As long as Arjuna and Bheesma is there, it is impossible to take over Hastinapur. Hence, Drupad brings in Shikhandi (half man / half woman, re-incarnation of Amba, she pledged to be the reason of Bheeshma’s death earlier in the epic.)

Now remains rest of the warriors, who are students of Drona. They can only be pacified when they are divided. Drupad needs a trump card here.

Her mission was to create jealousy among the first cousins, the Kauravas and Pandavas, which will make her a cause for war through humiliation and let the brothers kill other brothers. Drupad’s classical example of Divide and Conquer can only be achieved by a woman whose beauty has no match on this planet.

Remember how Draupadi insulted Karna in her “swayamvar sabha”. Calling him a “soot putra” and preventing him from participating in her wedding competition. This was adharma (not as per natural law), because Karna was a kshatriya (warrior), and denying participation of a kshatriya in an open contest is “adharma”.

Remember how Draupadi tells Duryodhana “The son of the blind is also blind”  thereby insulting the king and the senior prince of Hastinapur in public. “Adharma” again

She decides to marry a brahmin priest (Arjuna in disguise), thereby insulting the royalty yet again.

This naturally caused Duryodhana to get thoroughly enraged and he took it as a personal insult.

Kunti was no ordinary woman.

She was the sister of Vasudeva, the father of Krishna. She was a lady with supernatural powers and knew family politics very well.

Kunti knew that if Draupadi was married to only one of her sons (Arjuna), the other brothers would be jealous of him. Her beautiful personality should not divide the united power of the Pandava brothers. Hence, she did not withdraw her order of “sharing the thing” even after she discovered that “the thing” her sons had brought home was a princess. 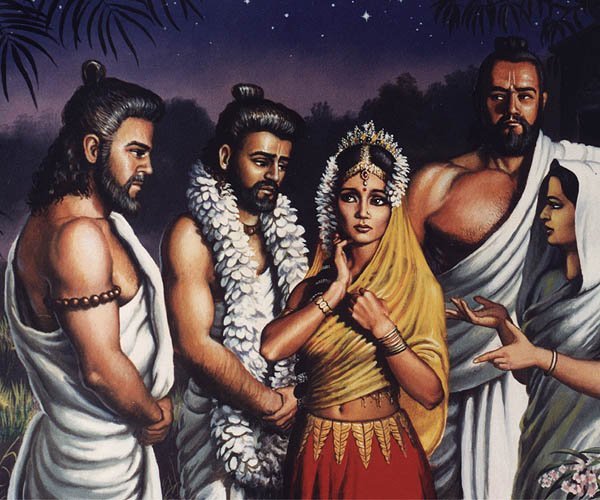 The gods knew were aware of  Draupadi’s future humiliation (disrobing incident) so if Draupadi was married to only one Pandava, it wouldn’t give rise to the rage for revenge in the hearts of the other Pandavas. So it was rather a strategic move to let Draupadi marry all the 5 men, so all the men could burn with the rage in their hearts.

So it was Draupadi who bound the powerful earthly elements together and made them united to fight, until “dharma” prevailed.

In early societies with high infant mortality rate and short lifespans, polygamy was preferred to polyandry. When a man had many wives, the family could have more children than a woman having many husbands. This value to fertility is one of the reasons why women were usually kept in seclusion and safety, a practice that eventually led to the throttling of women’s rights. But polyandry had benefits too – sharing a wife assured sharing of property and no division of the land.

One hears of co-wives fighting over their husband’s affection. Did the husbands fight over Draupadi? The epic does not explicitly discuss this, but the possibility of jealously tearing the brothers apart is alluded to repeatedly

In her previous birth, Draupadi had done “Ghor Tapasya” and invoked lord Shiva. She asked for a husband with 14 qualities ( the main 5 are Moral values, physical strength, skilled, handsome and intelligent)

I have done my Tapasya and it is upto you t grant me the fruit of my labor.

So be it. But be prepared to face the consequences.

In her next birth, Arjuna wins Draupadi but she was married with all the 5 Pandavas.

Draupadi asked Krishna (her best friend) how logical and correct it is to marry 5 men?

Panchali, you only asked for all those 14 qualities, didn’t you? You only wanted the best archer, a man with the power of 1000 elephants, a man whose morales and wisdom has no match in the planet, a man who is the most handsome and a man whose intellect is famous worldwide. Lord Shiva told you that what you are aiming for is an impossibility but you were firm on your demands. You were not ready to lower your standards. Now that your wish has come true, you cannot deny it. You have to accept it, for that is your karma.

This is insanity, I cannot marry my younger brothers wife. Arjuna’s wife is my sister in law for god’s sake. I am not going to do this, no matter that logic you put forward. This is madness.

When your grandfather, King Vichitravirya died without raising children, Satyavati went to Bheeshma and asked him to make Ambika and Ambalika pregnant (so that the Kuru bloodline can move forward). But Bheeshma was tied with his vow of “Brahmacharya”, he denied.

Satyavati then invited Vyasa and King Dhritarashtra and Pandu, your father were born. Who was Vyasa? Vyasa was the son of Parasara and Satyavati ( result of pre-marital affair), and hence he becomes the elder brother of King Vichitravirya.

In a moment of crisis, it becomes the elder brothers duty to move the family line, only if his younger brother’s wife approves.

Hey Pavan putra Bheema, it is the responsibility of an elder brother to protect and guard his younger brother and his wife. You are not an exception. Arjuna has won her hand, that is correct. But she is your responsibility too. If you don’t accept her, how will her vardaan of having a husband with the might of 1000 elephants come true?

So what happened is that she was married to 5 husbands. And the consequences followed.