In Vedic astrology, after Moon, Sun is considered the second most important planet which has the maximum impact on an individual. Sun affects overall personality, position, power, recognition, ambition, fulfilment and stability of an individual in various aspects of life. If Sun is powerful in a chart, it can negate the bad effects of other planets to a large extent. For example, if a Person has an exalted Sun in his chart and a debilitated Saturn or Jupiter or Mars on his chart, this powerful Sun has the potential to negate out the negative effects of the debilitated planet. 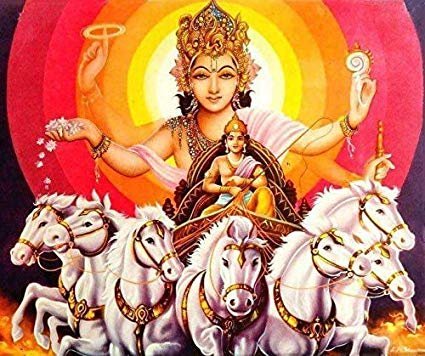 Depiction of Sun God riding a chariot with 7 horses, the charioteer being God Aruna. The 7 horses represent the seven colours of light (VIBGYOR) and seven days in a week.

What does Sun Represent?

Sun is exalted in Aries, so we have to first understand what does the house of Aries represent.

Aries also represents confidence and aggression. A person with an exalted Sun in Aries will enjoy all these qualities in his personality. He will be super enthusiastic in whatever he does. He will be very confident, will be ambitious, will have a passion for whatever he does. Aries also represents Anger and ego, so an Exalted Sun also means that this person will have a relentless Ego and Anger dictating his actions. He will lose control and sometimes will be super agitated beyond any measure.

Sun also represents Father. If a person has good position of Sun in his/her chart, it means that his/her father will be a respectable person in society with good position, power and fame. Sun represents Government, diplomatic relations and anything related with Administration. If you want a job in public sector or a central government job like IAS, IPS, Civil Services, it cannot be achieved if Sun is placed negatively or afflicted in your chart. Any government official, minister, diplomat or anyone who is related with government in any way must have Sun placed positively in their chart.

A good placement of Sun is mandatory if you want success in the field of politics, administration, law and order. If you are a Judge in court, a lawyer, a police officer, a district magistrate or someone who is in administrative field, you will not go very far is Sun is not well placed or does not have enough strength in terms of Degree, Nakshatra and other things.

Sun is also the planet which controls the reputation and fame of a person. If someone has bad reputation in society, it is very much possible that the position of Sun in that person’s chart is not favourable.

The Effects of an Exalted Sun in a Birth Chart

The Effects of Debilitated Sun in Birth Chart

One should be careful in his behaviours and actions and never intimidate the Sun god. Sun is the source of energy and light, which propels the entire life cycle process, so if Sun is intimidated, then there is no going back.

If Sun is not happy with you, it will crush you to that extent beyond imagination. Not only will sun take your fame, reputation, position, power, self confidence, self respect, fulfilment and energy but it will make you so dull and depressed that you will lose a reason to live.

Sun god is intimidated if someone does the following actions

If Sun is intimidated by your actions, no other planet can help you no matter how strong that planet is in your birth chart. It is because Sun is the king of solar system and without’s Sun’s wish, none of the other ministers can help you out in achieving your potential. Sun is the de facto Chief Boss of this solar system so you should never ever intimidate the Sun God. If you do, Sun will burn your life like it does burn dry leaves in the season of summer.

How to Pacify Sun God if he is Angry on You?

If you are living a miserable life with low income, lot of debts to pay, no good relationships, lack of fulfilment, purpose, loss in business, problems at work and quarrels with boss and superiors, loss of house or property, long stretching disease making you bankrupt, loss in power, position, divorced, unable to have children, no respect in society, facing court cases or you are imprisoned – there is a high chance that Sun is unhappy with you or the position of Sun in your birth chart is not favourable.

There are many remedies you can take but I am sharing the simplest one.

Go to bed early and wake up before Sunrise. Sun likes those people who start their day early, who wake up before Sun wakes up and those who salute the Sun every day (Early to bed and early to rise, makes a man healthy, wealthy and wise). If possible, perform Surya Namaskar. Salute the Sun and try to relive his anger by giving him you respect.

If you don’t want to do Surya namaskar, offer water to Sun by facing the Sun while it is rising and Orange in colour There is no point in offering water to the Sun at 11 Am or at Noon when the Sun is Yellow in colour. The water is to be offered at the time of Sunrise only, when Sun is visible half risen at the Horizon. 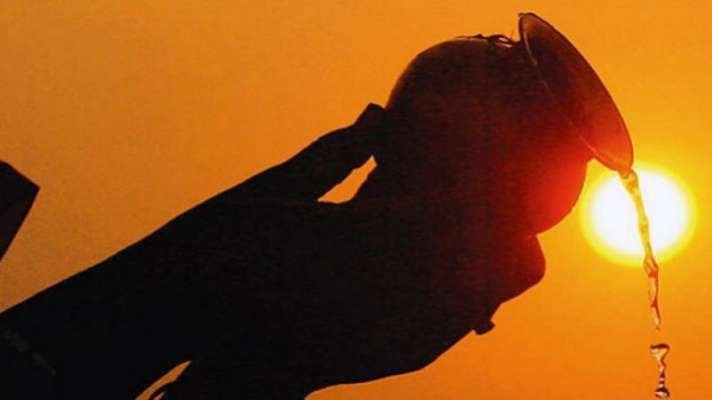 Next, you can chant Surya Beej mantra 108 times facing the direction of Sun

Pacifying the anger of Sun creates many positive effects in life and negates dullness, inactivity, depression, debts, diseases and enemies.

Sun is the source of all the energy and it helps to cure depression, dullness, inactivity and can pacify any battle you are fighting. If you are not in the good books of Sun God, no other planet can even dare to come to your rescue.