We have a question by Pritam

First we have understand the building blocks of the army division on both sides and how the hierarchy of soldiers was maintained.

The above ranks are not just a reflection of skill or mastery of a weapon. It also includes knowledge of battle formations, strategic skill set, tactical knowledge, past experience, ability to crack”battle traps” and so on. Simply because an archer rode a chariot did not make him a Rathi – the warrior needed to have some fearsome reputation and class battle experience too.

Yudhisthir and Bheema both are considered Rathis but their respective sons – Prativindhya and Sutasoma are Atirathis. You may wonder why is that when both Yudhisthir and Bheema are more experienced than their sons? The reason is – Prativindhya and Sutasoma were highly skilled in battle plans, strategies, forming bottlenecks and tackling different battle formations (“Vyuhas”). They also had mastery of all forms of weapons which includes bows and arrows, mace, sword and spear.

Again, Abhimanyu – the youngest son of Pandava family is a Maharathi. This is because he had knowledge of cracking Chakravyuha and knew how to move the fastest in the battlefield. Only Abhimanyu and Arjuna had the mettle of tackling Drona, Bheesma, Aswathhama and other Maharathis from Kaurava side.

Please also note that just because a warrior has a higher rank, that doesn’t mean a warrior from a lower rank cannot beat or kill him. Example – Shikhandi was only a Rathi but he ended up killing Bheesma – a Maharathi.

Now coming to the warriors who were considered fit for each rank.

No Warrior in Mahabharata held this rank.

Shiva and Kali are said to be the ultimate Mahamaharathis who held the power of destroying the whole universe in one blink of an eye.

The only person who was capable of becoming a MahaMahaRathi was Aswathhama but there was a condition – he had to be extremely angry and excited to unleash his full potential (which he himself did not knew). Aswathhama had this potential because he descended as an avatar of Rudra, which is Shiva himself.

Only Drona, Bheesma and Krishna knew the true potential of an angry Aswathhama but they never revealed this to anyone. Aswathhama was one of the Chiranjivis and is supposed to live as an immortal, superceeding the “Ichhamrityu” of Bheesma. Vyasa is of the opinion that Shiva was a silent observer of the whole ordeal (in the form of Aswathhama) and would have taken steps to destroy the whole humankind, if Krishna failed to preserve Dharma before Kali Yuga prevailed.

No warrior in Mahabharata war held this rank. Vyasa was of the opinion that Krishna is the only Atimaharathi after Parashurama, because of his Sudarshan Chakra which is deadlier than Bhrahmasthra, Pashupatashtra and all divine weapons combined.

Apart from Parashurama and Krishna, Ravana’s son Indrajit was considered to be an Ati-Maharathi.

Acording to Vyasa – Bheesma, Karna and Arjuna were equal to 2 Maharathis but not Drona.

This is because Drona is a Brahmin and he does not have Khastriya blood while the other three were princes of royal clan and had that legacy with them. Karna, although a “Soot putra” to the society is actually a prince and belongs to the prestigious “Khastriya” class, having obtained mastery of all weapons, battle formations from Parashurama, is considered equal to 2 Maharathis.

Vyasa considers both Duryodhana and Bheema have the talent of an Atirathi but since both are weak in strategy and tactical thinking, they are slightly lesser than an Atirathi but higher than Rathis. Bheema and Duryodhana are considered equal to 8 Rathis.

Here is the hierarchical chart of different warriors. Skilled Units on Both Sides

If we consider Rathi as one unit,

Total unit count = 1021 ( I have counted Bheesma and Karna only once since they did not fight the war at a time, one replaced the other)

So we can see that skill wise, both the sides were nearly equal in terms of unit count

Please note: There are other warriors whom I have missed, it is impossible to list each and every warrior because there were hundreds of other kingdoms who participated in the war. Most of these warriors were “Rathis” and not well known.

Military Units on Both Sides

In total, there were 18 Akshauhini units which means the total combined strength of the army on both sides is

This has a sharp co-relation with the game of Chess (“Chaturanga“) which was invented in ancient India.

A “Vyuha” is an arrangement of the army divisions to attain a specific objective at the end of the day’s war. Every day the commander in chief of each army will arrange the army in a specific formation, so that his army can attain the objectives of that specific day. Depending on the the objective, risks, threats, opportunities, the choice of “Vyuha” was made.

Please also note that a “Vyuha” is not a static position wherein the army would simply arrange the soldiers and generals in that formation and go attack the enemy. A “Vyuha” is dynamic in nature and it continuously adapts itself to the position and situation of the war.

If one of the Generals dies, the Vyuha is technically designed in such a way that every other general knows what needs to be done to re-structure the “Vyuha” and maintain it’s formation. If one of the wing is taking huge casualties, the other parts of the “Vyuha” would re-structure itself and save the formation. If the goal of the “Vyuha” is to capture a key personnel of the enemy, the “Vyuha” would constantly change and adapt itself so as to ensure that the target is met. The opponent will counter with their own “Vyuha” and hence the position of the key personnel would continuously change. Hence the “Vyuha” of the attacking army has to be designed in such a way, that the final objective is met through continuous re-structuring, adapting, re-organizing and re-in forcing.

Now you may wonder,

How can such a huge army re-structure itself in the middle of the war? How can so many soldiers change positions, tactics and decide what to do when a key personnel dies or the attacking army changes it’s formation?

You see, the army is composed of soldiers from various kingdoms. Each general from a Kingdom is well equipped with the decorum, code of conduct and technical details of a “Vyuha”. But ordinary soldiers, cavalry and infantry men don’t know those things and they would have to be ordered to move and re-structure themselves.

This was done through the code of big drums, Trumphets, Sankhs and other horns which would instruct the army what to do. Given below is a picture of a modern day Nagara but at that time, Nagaras were even bigger, mounted on the top of an Elephant and drummed by long bamboo pipes. 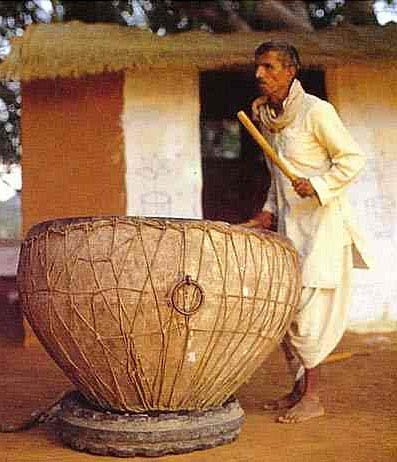 When the General wants to convey a command to his army or divison to change positions, he would instruct his Nagara player to beat a specific tune. That tune is a code and the moment that tune is played, everyone in his division would know what to do and how to re-align the army.

There are other techniques as well. For example, when Arjuna fired “Varunastra”, Bheesma knew that Arjuna had fired Varunastra and instructed his army to take protective measures. He blew his “Sankh” in a specific note and all the other generals were thus informed that Arjuna has fired “Varunastra”. With this knowledge, the Vyuha would re-align itself to avoid casualities until Bheesma fired a counter weapon to stop the effects of Varunastra.

Once Varunashtra was neutralized by Bheesma, then the Sankh was played one more time and the “Vyuha” re-aligned itself once again to attain it’s objectives.

The position of a Maharathi, Atirathi and Rathi was determined by the commander in chief and as per the merit of the general, the position was given. Every counter measure was taken and analyzed, different plans were made to neutralize damages, if a Maharathi dies. A Maharathi or general simply could not choose his opponent as per his wish, everybody had a fixed target and task that had to be catered to.

These are the following Vyuhas used in the Mahabharata war

Kauravas – Drona – “चक्र व्यूह” (“Chakra Vyuha”)
Pandavas – Abhimanyu – No Vyuha was formed on this day because Abhimanyu was the only warrior that entered Enemy’s formation while rest of the army was held back on gate 1.

Now it is impossible to describe how each view functioned since each Vyuha comes with it’s own intricacies and this post will become more and more lengthy if I start writing about each and every Vyuha. I would however, write about one Vyuha so you understand how it functions.

In this formation, the entire army is shaped in the form of a bird (crane) 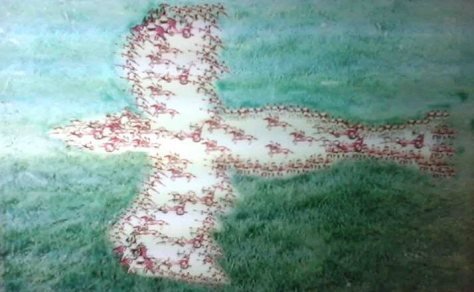 The army is concentrated in the center and two Maharathis are given the responsibility of the wings (flanks). This vyuha is designed to be both offensive and defensive and depending on the situation, the commander will decide how the wings will work.

When this formation attacks the army, it looks like an entire sea of army is invading. The concentration is not that much in the wings but it appears to the army that an overwhelming force is attacking. When the wings lose their men, re-inforcements are sent to either side from the middle column.

The commander is placed at the head of the bird and other warriors follow him up to the neck. Now I will explain the offensive attack of this bird, let’s take the example of 6th day when Kauravas decided to use Kraunch Vyuha against Makar Vyuha made by Pandavas 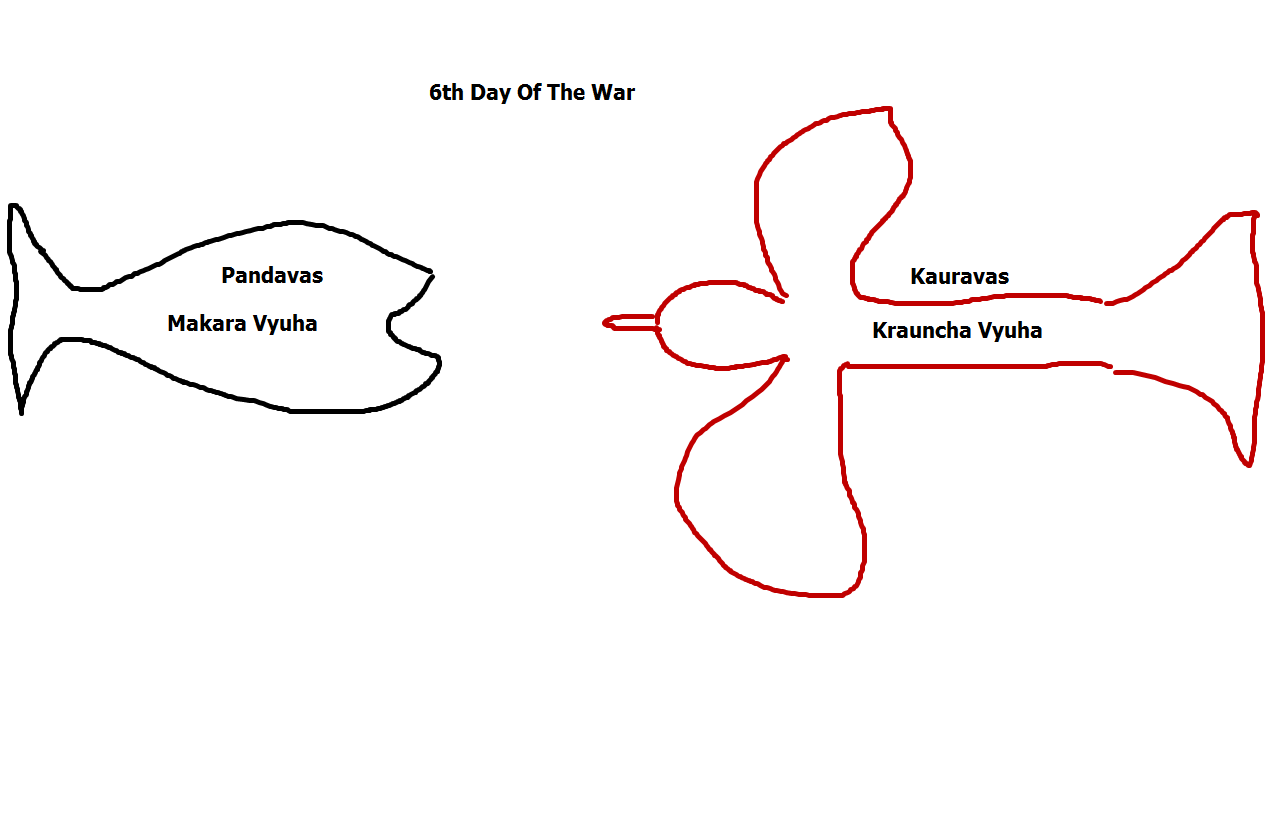 The offensice strategy of the bird is that it will penetrate the opponent in the center with it’s beak. While the beak is penetrating in the middle, the wings will cover the army from two sides and prevent it from escaping or expanding. This is the offensive of the Bird while defensive of the Fish. Once the war started and each side expanded into executing their plan, it would look something like this It appears as if the Fish has consumed the bird, deliberately allowing it to pierce the middle and then cutting down it’s wings. The center column of the bird continuosly re-inforces the wings and strengthens the center, allowing the beak to go deeper into the enemy territory and hit the tail of the fish.

This is just an overview of the offensive formation of a Vyuha. This Vyuha can turn defensive as well, when one of the wings or both wings are weakened. Then the beak of the Vyuha slowly withdraws from the center and aligns with the two wings to form a firm center column, keeping no distance from the wings.

This is the defensive of the Kraunch vyuha, the center and the wings have come closer and the bird is not trying to overpower the enemy by spreading it’s wings but it decides to form a strong center and slowly withdraw from the battle.

This is just an overview of one Vyuha, it can be arranged in so many other ways also.

As I mentioned in the beginning of my article, it is not possible to outline each and every detail of each vyuha because the scope is so big. Please read a book on Mahabharata (Kishori Mohan Ganguli) to learn more on Vyuhas and they were supposed to work.