Satya yuga is identified as the “Brahmin” varna, Treta as the Khastriya, Dwapar as the Vaishya and Kali as Shudra.

Each yuga will manifest the qualities of the varna in human kind and these qualities will be visible in the social structure, thought process and behavior of any entity(humans, family, organizations, culture).

Each Yuga can again be divided into 4 sub-yugas which manifest in the present Yuga. So the first quarter of the satya yuga will be “Satya – Satya”, the next “Satya-Treta” followed by “Satya-Dwapar” and ends with “Satya-Kali”. This is applicable for all Yugas and each Sub Yuga can further be divided into finer Sub-Sub yugas and so on and so forth.

According to astrological vedic calculations, Kali Yuga started around 3102 BC and will last for 4,32,000 years. This is the entire time span of Kali yuga but note that this is not the entire life span of Humanity and morality. The life span of humanity in Kaliyuga is 10,000 human years and vedic predictions state that it will end around 6480 AD. 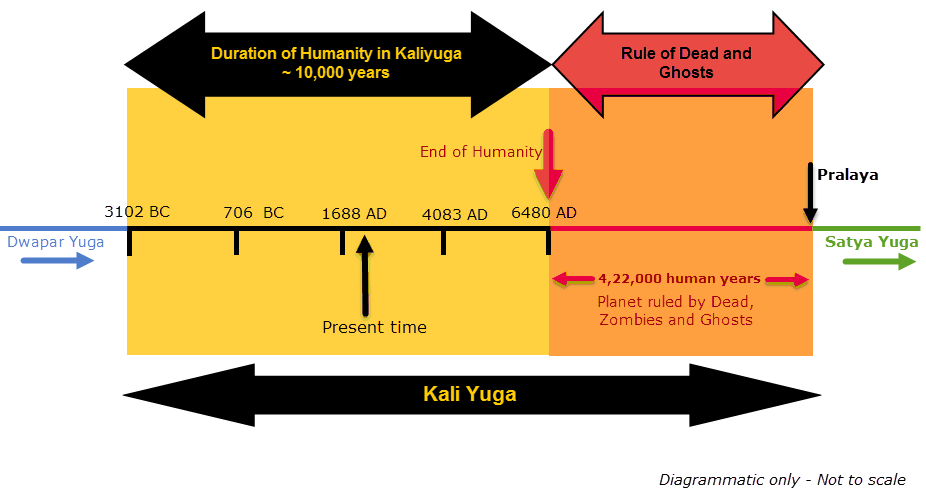 The age of sin, vice, quarrel and ignorance has started and we are living in the third quarter (Kali – Dwapar). This means that the world still has some virtue left in it. The world still has the knowledge of morality in it but it is decaying fast. People are quickly forgetting these principles and are engulfed in sin but the principles haven’t been eradicated completely. The principles will be completely eradicated by the end of “Kali Dwapar”, around 4000 AD when all the virtues and morality will be forever lost from human kind. At 6400 – 7000 AD, humanity will be extinct and the age of ghosts, demons, zombies will begin. The dead shall walk and rule the planet.

At the end of Kali yuga, we will return to the beginning of time and Satya yuga shall prevail.

Vedic seers were able to foresee changes in humanity, how human kind will transform, how principles will be forgotten in the age of Kali. Following are some of the predictions made by Vedic seers in Kali yuga

1. Thieves will become kings, and kings will be thieves.

2. A person will be judged unholy if he does not have money.

3. Duration of human life will diminish day by day. The maximum duration of life for human beings in Kali-yuga will be 50 years and it will continue to decrease with time, the least being 23 years. A day will come when man will have to bring a ladder to climb a Brinjal tree.

4. Men and women will live together merely because of superficial attraction, marital relations will be based upon outer appearances. Marriage will be arranged simply by verbal agreement and broken at will.

5. There will be many displaced people, wandering from one country to another in search of food and employment. People will beg for their life and unemployment will increase day by day.

6. People will be envious, no one will trust others.

7. Pre-cooked food will be readily available.

9. The citizens will suffer greatly from cold, wind, heat, rain and snow. They will be further tormented by quarrels, hunger, thirst, disease and severe anxiety.

10. A man with a sacred thread will be considered “Learned”, fools will become saints and sages.

11. One who is very clever at juggling words will be considered a learned scholar, institutions will turn into business machines and knowledge will remain with few.

12. Knowledge will not be distributed but manipulated to meet mundane objectives.

13. Hypocrisy will become a virtue, it will be impossible to survive without being selfish, cruel and tormenting others in some form or the other.

14. Cows will be killed, animals will be ruthlessly hunted down for pleasure and forests burned for wood.

15. Avarice and wrath will be common. Humans will openly display animosity towards each other. Ignorance of dharma will occur.

16. People will become addicted to intoxicating drinks and drugs. Sensual gratification will become the goal of life.

17. Students will openly ridicule and quarrel with their teachers.

18. Water will be lacking and will be traded for Silver.

19. The state leaders will no longer protect the people but, through taxes and rules, will loot all wealth of citizens.

20. Petty – minded people will conduct business transactions and merchants will be dishonest.

21. Fetuses will be killed in the wombs of their mothers. People will freely commit abortion.

22. The purpose of life will consist simply of filling one’s stomach, and audacity will become equivalent to conclusive truth. If a man can even maintain his own family members, he will be honored as very expert, and religiosity will be measured by a person’s reputation for material accomplishments

23. The citizens will be so oppressed by merciless rogues in the guise of rulers that they will give up their spouses and property and flee to the hills and forests.

24.  Beauty will be thought to depend on one’s hairstyle.

26. Human beings will become shortsighted, unfortunate, gluttonous, lustful and poverty-stricken. The women, becoming unchaste, will freely wander from one man to the next.

27. Men will develop hatred for each other even over a few coins. Giving up all friendly relations, they will be ready to lose their own lives and kill even their own relatives.

28. Uncultured men will accept charity on behalf of the Lord and will earn their livelihood by making a show of austerity and wearing a mendicant’s dress.

29. Those who know nothing about religion will mount a high seat and presume to speak on religious principles.

30. Servants will abandon a master who has lost his wealth, masters will abandon an incapacitated servant, even if that servant has been in the family for generations.

31. Men will no longer protect their elderly parents.

32. Many sudras will become kings, and many heretics will be seen.There will arise various sects, sannyasins wearing clothes colored red.

33. In the Kali Yuga, men, corrupted by unbelievers, will refrain from adoring Vishnu, the Lord of sacrifice, the creator and lord of all. They will say: Of what authority are the Vedas? What are gods, or Brahmins? What need is there for purification with water?

By 7000 AD, humanity will be extinct from this planet (this event and date has also been prophecized by the French Prophet Michelle De Nostradamus and the Christian book of Enoch ). After 7000 AD, the dead will walk and the planet will be ruled by Ghosts.

Kalki, the 10th Avatar of Vishnu will arrive before humanity ceases to exist, he will kill by the millions those thieves who have dared dressed as kings. He will free the world from “Mlechhas” but will not restore humanity. He will depart this world and it shall be ruled by Ghosts and dead for another 422,000 human years, after which Satya yuga shall begin all over again.

– references to these prophecies can be found in Shiv Purana, Vishnu Purana, Linga Purana, Srimad Bhagvatam and other texts and interpretations by scholars.