In Hindu Mythology, goddess Kali is the most fearful one. She is naked, drenched in blood, with a skull in her hand and slaying everyone in the battlefield. The scene itself is disturbing and not for timid souls.

The literal meaning of “Kali” is “Time”. She represents divine power, time, death and change through violent and extreme measures. Kali is also the main goddess for Tantriks and ascetics studying “Tantra vidya”, the vedas mentions Tantra as a supreme form of realisation of god through negative energies. You will see many tantriks in Indian funeral ghats doing their tapasya since they want to achieve god through the darker side. 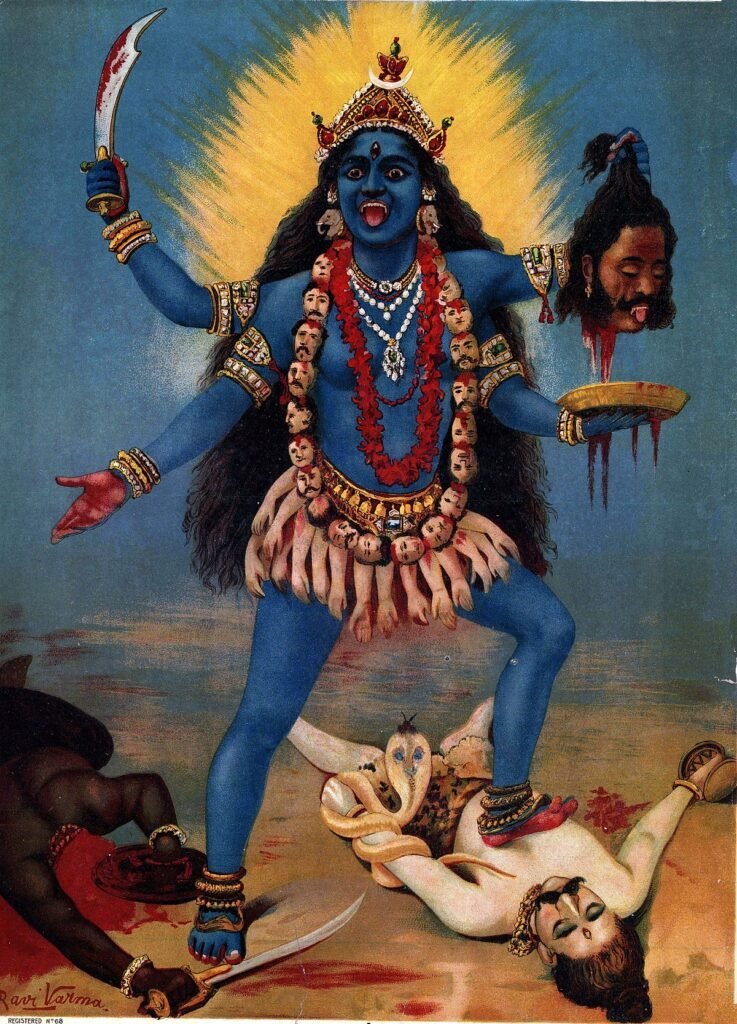 Kali is not  a dormant goddess. In West Bengal, India, Kali and Durga are the two prime goddesses who are worshipped through out the year in different forms. Both the goddesses represent power and “shakti” and both are believed to be very close to their devotees. In fact, Kali is the one goddess who responds faster than any other goddess, as believed by some tantriks and hence she is the chosen Devi for anyone studying Tantra vidya. It also explains why we have seen saints like Bamakhepa, Ramkrishno and others reverring the goddess Kali so much.

Before I tell you the mantra, let’s quickly go to a story of Bamakhepa and see how Kali responds to the call of his devotees very quickly.

The story is long but i will make it quick. So there was this naked saint in West Bengal who was a devotee of Goddess Kali. He was ridiculed and ignored by people and sometimes trashed around the city as a maniac. Once he visited the temple of Goddess Kali and wanted to eat the “Bhog”. He wasn’t given the Bhog and was told that the “Bhog” will be first given to the goddess and only after it’s offered to her, will others get to eat it.

That night, the queen of the temple got a dream and she saw Goddess Kali angrily saying

Why is my son hungry? Why haven’t you fed him? I want him to be fed before anyone else tomorrow.

Bamakhepa was so much devoted that when he would feel hungry, he would rush to the temple and would put his mouth in the Goddess’s breasts, like a baby who is hungry finds solace in his mother’s arms.

Kali – The Slayer of Enemies and Conspirators

Kali is also known as a slayer of enemies and conspirators. If you are in a situation wherein you feel others are plotting against you, wherein you feel people are trying to conspire against you and pull you down, goddess Kali needs to be called and sought for. Kali has no mercy for anyone and she will take the matter in her own hands and give quick results, provided you are a true devotee and your intentions aren’t wrong.

I have seen many examples of this in my own life. Whenever I have felt i was being overpowered by a stronger enemy whom I cannot fight, whenever i have felt helpless and in a state of total surrender, whenever i have felt that my ground is slipping away and i will collapse at any moment, goddess Kali has always come to my rescue.

Let me tell you one incident.

I was working in a job and it was going well, until one day a new boss comes and starts wrecking havoc in each and every thing I did. He changed everything, gave me a smaller work, took all that i had and started imposing things to make things look better to senior management. I could feel that my ground is slipping and that my value is deteoriating. There would be frequent escalations, arguements, excessive stress, burnout and a total collapse of my mental well being.

A point came when I realised that things have gone beyond a point and I do not have the ammunition to fight this enemy, and I had to call the goddess for my aid.

Every night at 2 AM take a full clean bath. Leave your old clothes, take a fresh bath and come out with only a small robe around your waist (an Indian dhoti is the perfect robe, you should avoid stiched clothes or undergarments). Sit in a completely dark room with one photograph of the goddess, one candle or one Diya with some Fire in it. Take a Rudraksha Mala and chant the name of Goddess 108 times.

While you are chanting, just ask for help. Do not ask or tell her to do any damage to the enemy. That’s not what you should do. Just tell her your predicament and ask her to help you. And while chanting, visualise the person in your mind and keep visualising that person during that entire process. You should completely submerge yourself in that meditation process, with eyes closed, so that you only feel the little warmth of the candle and nothing else.

If you are not sure who your enemy is, just visualise the people whom you think are doing the damage or could possibly be the enemies. You can visualise multiple people. Don’t worry, Kali will not harm anyone, she will find who the conspirator is and take some action which does not necessarily mean that the said person will be harmed in any way. She will simply take an action and your situation will be relieved.

In my case, I got the results in 8 days.

I know, people will call me a bluff and what not, but I got the results in 8 days. For 8 days, I had constantly chanted the mantra at exactly 2 AM in the night in my living room. If you can chant the mantra in an open sky facing the direction of South, that is even better. But I did not go to any temple, neither I paid any money, nor I bought anything except a garland with 108 buds, a photograph of goddess Kali was already there in the house and that’s all.

What happened is that all the unnecessary toxicity at work just vanished, the boss left the job, i got promoted with a huge pay increase which I had not even imagined. It all just happened out of nowhere and still to this day, I cannot connect the dots on what could have suddenly turned the situation around except the goddess herself.

But bear in mind, if you are not honest and have evil intentions, this has the potential to backfire. The goddess answers the call of her devotees really fast but she is merciless. If she finds that you are the one who is conspiring and plotting evil things, then her anger will fall on you. Be very careful and don’t do this if you don’t know what you are doing. If you are genuine, and if your situation is really helpless and you haven’t done anything wrong, then you have no reason to be afraid of Kali and calling her to your aid. However, if you are not cent percent honest, if you have also participated in a wrong doing and trying to justify yourself, if you think you can get away with it – you are wrong and deceived. Kali’s sword will fall on you and your enemies at the same time and both of you will be destroyed, and uprooted like grass.

Let me also tell you this very important thing.

To earn the trust of goddess Kali, you have to tell her whenever you have done something wrong. I am not a saint and I have earned my share of “Paap” as well through wrong doings, through violating “Dharma”, through acts which I should not have done. Whenever I realised that I had done something wrong, I rush to the mother and tell her whatever I had done. There is a temple near my house, I go there and tell her everything that i have done, what made me do it. I also ask for forgiveness and if she feels it is necessary, then some punishment as well. This is way to show the mother your genuine side and earn her trust.

The more you earn the trust of Kali, the quicker she will respond to your difficulties.

Some people might think – wait, I have never worshipped the goddess, and neither i have even been to a Kali temple, will the goddess listen to me? The same question was asked by Swami Vivekananda and the master Ramakrishna Paramahansa had replied –

“Just ask with an honest mind, she will respond”

You don’t need to worship the goddess at all, you don’t need to visit a Kali temple or do any traditional offering. All of that is not required. The only thing that is required is to tell the goddess whenever you are erring, whenever you have done something wrong, ask for forgiveness, ask for penance, ask for the path of liberation, willingly ask for punishment. That way you are earning your trust with her and the more she trusts you, the sooner and aggressively she will come to your aid.

Whenever you are surrounded by enemies, creditors, banks, investors, police, goons, dacoits, politicians, a difficult boss,  whenever you are overpowered by an enemy you cannot fight, whenever you are in a situation of total surrender and think you are going to collapse, call the goddess Kali with utmost devotion and honesty. Recite that mantra at night time after taking a proper bath, and you will be amazed how soon the response is received at your end.

I have received several responses in my life so far and I continue to talk with her once in a while. It’s not that she responds all the time, sometimes she is upset with some of my actions and it takes time for the repsonse to come. But I have found that the response comes and it comes miraculously, in ways which I hadn’t foreseen.