We have a reader question by Prakash

What is the real cause of poverty? Is poverty a consequence of the growing population which ensures that the amount of resources get lesser for each head? Or is it something else?

This is a question on Economics, not philosophy. I am no economist so my views may appear flawed to financial experts. However, I will try to explain the concept of poverty from a philosopher’s point of view.

Money is a technology which is used to store value. We use money to exchange value through a transaction.

Money is not value, rather a medium of “value exchange”.

So if you have a pile of cash and you end up in Greenland, money won’t help you. This is because in Greenland, that money is a piece of paper and is worth nothing. Money is worth only when it is exchanged for real world goods.

So if we are to classify money into a technology, we can use the term “Storage”. A technology which stores value and let’s you exchange it whenever you want, however you want.

There is no “Storage technology” in Nature

In nature, no storage technology is available. Both the weak and the strong has to work every single day or it shall die.

Nature has no preference for the strong or the weak. No matter who you are, you have to work, hunt your food – you cannot use technology to store your need for tomorrow. 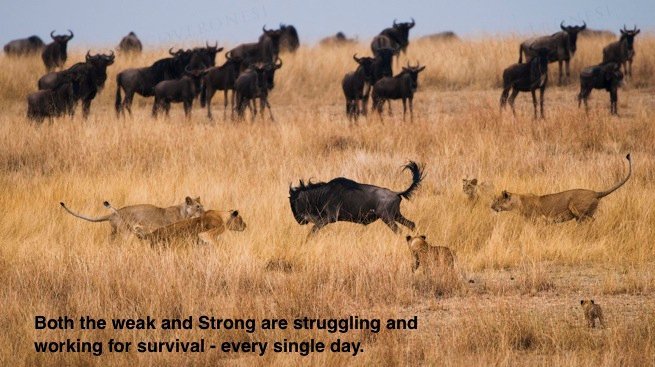 However, humans have invented something which let’s them store value (money). This technology is the cause of all problems.

Imagine a scenario where the Lion is somehow able to store its own food for two years and needs no hunting. The Lion is chilling around as it pleases – no more work to do.

Let’s examine some of the consequences.

And the chaos shall continue.

Notice how a small invention actually led to imbalance. All of this happened because the Lion learned the secret of “Storing value”.

The “Lions” of Human Society

We do have these Lions among ourselves. People who have the luxury and opportunity of storing excessive money or real world goods. These are the people who do not want to work for tomorrow, so they have somehow figured it out and have stored that “Value” for future use.

This includes the following

These are the Lions who have somehow learned how to store excessive value which creates more value out of nothing. They are at the top of the “Value chain” and they do nothing but sit on an enormous pile of “Value store” and rotate money to grow it.

Who will suffer? The rats, the rabbits, the insects, the moths, the flies – the animals who are at the bottom of the food chain. People like you and me who work everyday to earn our bread and butter – we are the people who will suffer and die a brutal death, eventually. Anyone who is currently in debt or has no saving mentality is soon likely to perish.

Make no mistake, it is not the Lion’s fault. If you teach the technology to Rabbit, it shall do the same thing. It is the invention of this technology which has eventually led us to this disaster and now there is no way to reverse this situation.

Before Money was invented

Every object has two uses, the first being the original purpose for which the object was designed, and the second possibility is to conceive of the object as an item to sell or barter.

Before money was invented, there existed a Barter system where real world goods were exchanged when the need arised. I know villages in India where this system exists to this day, they do not use paper currency that much since they are poor and have a shortage of currency at their disposal. The farmers trade food with the tailor, who in turn trades his labor with the local Baidya (Doctor), who in turn trades his knowledge with a teacher and so on and so forth. The trading occurs with real world goods or service, not a paper currency which has no value of its own.

Clever Lions of our society observed problems in this system of trade.

And the Chaos started. People started storing money which caused inflation and the rich got rich while the poor got poor. The Lions are doing nothing which is why the rats and moths are dying.

Creating Value out of Nothing

Take the example of Banks. The Banks do not have any money of their own, they make it up and loan it out to you. When a loan document is signed, you agree to pay interest on the loan – this is how money is created out of nothing.

Money is a technology which is used to store value. How can someone create value out of nothing? That’s impossible and a physical fallacy. It’s like raining Mangoes from the Sky out of nothing – what a joke!

On any given day, if everyone goes to their bank and withdraw all the money, what will happen? Suddenly the Banks are out of business since they have no money to circulate. Now that the Banks are out of business, the “Lions of the society” will have no technology to store money. Now they will start hunting their food and Balance will slowly return in a few hundred years.

Money is Debt and Debt is slavery. Only 3% of the World’s total money exists in the form of paper currency, gold and coins. Rest of the money exists in the form of Debt that is loaned out to people and government by Banks, corporations, investors, oil merchants. Which means, the amount of Debt is always higher than the amount of “Value” that exists.

Debt is slavery. There is only one way to recover debt – slavery. Slavery in the form of war, national debt, economic crashes, controlling strategic value points (Oil for example), selling weapons and installing a state of war to achieve business objectives.

Nobody teaches money and financial literacy in school or college. This is because nobody wants you to learn how money works – that money is a myth and money is a trap, the reason is that the Lions of the society don’t want the rabbits and the rats to learn and acquire this technology.

The only way to overcome poverty is to educate yourself about money, understand how money works. Be financially literate, understand basic financial principles e.g what is cash flow, definition of debt, what causes inflation, what is mortgage, putting money to work and not working for money, assets, liability, taxes et cetra.

In short, become another Lion.

You should also check out this website – Hidden secrets of money where Mike maloney has clearly explained how the banking scam works and is responsible for all the chaos that is created when money is created.

There is another highly informative video Zeitgeist addendum which explains the fraudulent origins of our Monetary System. It then deals with the enormous impact it has had in regards to the corruption of society, Big Business, and Geopolitics.

Remember, everything is linked to each other in some way. If there is war in another country, it is affecting your country in some way or another. You may not realize this from the surface but it will definitely affect your country. World Politics are interlinked array of decisions and strategies and at the end of the day – every big business is dependant and connected with another in some way.

If there is an abundant supply of potatoes in the market, their prices will decrease. People will throw potatoes here and there and a time will come when cows will eat potatoes (since they are free and readily available). All potato farmers will go out of business and starve. This will show its effect on other farmers as well. The same concept is applicable for money and money supply.