Karma is nothing but the fruit of the “soul’s” action.

In Ramayana, Ram steps over a stone to free Ahalya, she had been a promiscuous woman cursed by her husband. 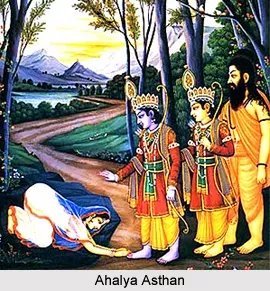 So in this case, Ram is the criminal as well as the liberator. Ram steps on the stone and causes grief to the “Physical” body of Ahalya but at the same time, Ram liberates Ahalya of her sin and her soul is freed from her karmic causes.

So in this case, Ahalya was living a tragedy and she was insulted by Ram but that act of insult turns out to be an act of “Liberation” for “Ahalya”. Ram also had karmic causes for the act of insulting a woman, which is one of the reasons why he was abandoned by his wife during old age.

So you see, Karma acts both ways. And karmic causes can be transferred.

Karma does not justify any crime. What this means is that the soul must have committed a sin somewhere along the journey and the law of Karma simply liberated the soul from its karmic causes, thereby passing the “Karmic” debt to another person (carrier), so that the soul is given another chance to return to its track. In Ramayana, Ram carries the sin of “Ahalya” and liberates her, which is why he has to suffer.

Let’s say a man insults women in his present live. He has no character and he abuses women whenever he gets a chance. Karma states that the man may not get the fruits of his action in this life but in his later life, he might be born as a Nymph and kept at the mercy of many men. He might be tormented and tortured and he might receive pains to a greater degree, since his sin has grown in “interest” overtime. Karma will nullify the cause effect conundrum and he will be liberated in due course of time by some “Ram”.