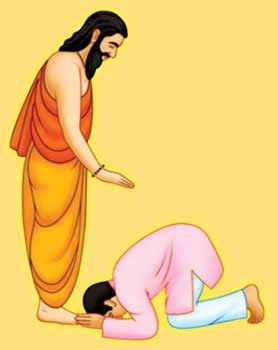 Guru is the Sanskrit term for “Teacher”. Someone who propagates knowledge to his disciples is often referred to as “Guru”. Guru is not an acronym for master or someone who is very skilled in a craft (as used in popular culture).

The theoretical meaning of Guru is – “Gu” (darkness) + “Ru” (Rudra which means destroyer). Someone who destroys darkness and shows the path to a subject is called Guru.

Hinduism advocates that Guru is greater than the Gods. Here is the Guru Strotam

Guru is Brahma, the creator. Guru is Vishnu, the preserver and Guru alone is Shiva, the destroyer. Without Guru’s help, I cannot find the “Brahman” inside me and hence I am always in debt of my guru for giving me guidance. O Guru, I salute you.

There is a famous Doha by Kabir Das about Guru

If God and Guru comes and I have to choose one for offering my salutations, I will chose Guru and ignore the Gods. This is because it is Guru who has taught me what God is so to me, my guru is much greater than any god.

When the Student is ready, the “Guru” shall appear

In modern world, people fail to recognize their Guru(s) during different stages of their lives. In the Hindu epic Mahabharata, Arjuna had Drona as his Guru in Childhood. His next guru was Indra, and then it was Krishna and lastly it was Yudhisthir. He recognized his Guru in every phase of his life because the “Guru” was always hiding in disguise.

The Guru is always present in disguise and it is the duty of a student to “seek” the Guru.

The Guru will not run to the student and show him the way. It is the student who has to find his Guru and seek blessings, so he can come out of the darkness and observe the “Brahman” within.

In the Mahabharata, Drona is the “Guru” of both Arjuna and Duryodhana. But alas, Duryodhana could never get all the lessons from Drona. It is because he was not ready, his mind had other things to worry about. Arjuna on the other hand was ready to receive lessons and hence, the same person is a Guru to one while not a Guru to another.

Interestingly, Balarama is the Guru of Duryodhana while he is not the Guru of Arjuna. This is because Duryodhana is ready to receive lessons on mace fighting while Arjuna is not and hence, Balarama becomes Duryodhana’s guru while not a Guru to Arjuna.

Karna had Parashurama as his Guru because he had a completely different context, when compared to Arjuna. So it is not Drona or Parashurama or Arjuna or Karna, it is the context and “readiness” of the subject which decides who can become whose “Guru”.