We have a question from Praveen

Also, if chanting mantras really work, what are the mantras an individual is supposed to chant on a daily basis?

Great question Praveen. I will answer your questions one by one and later discuss which mantras one should chant on a daily basis and how these mantras actually work.

First of all, let’s understand how negative effects are produced in our life.

We and only we are responsible for producing negative karma in our life. The external world is simply the occasion, the platform where we play our parts. If there is any negative or bad phase in our life, then it is upto us to correct ourselves. We are nothing but a result of our past actions, whatever we are today is a result of our past work. So if you are going through a bad phase in your life, it just means that your past karma wasn’t good and that past karma has brought you to this position.

If you correct your actions, good things will happen in some time. This rule is applicable to anyone, irrespective of their position or work.

Some examples from our day to day lives

As we can see, the planets do not solve our problems. They simply show us the right path when we chant their mantras, take the remedy of gemstones or other astrological remedies.

This planet is often called the “Yog karak” planet in a birth chart. This Yog karak planet is that planet which shows right path to an individual, this planet is considered his best friend, philosopher and guide. This is the planet which saves the individual whenever he is in problem, distress or any kind of danger.

Some things to note regarding yog karak planet

In general, the exceptions are found very, very rarely since 80% of birth charts are normal in nature. People who are very famous are often seen with Yogkarak planet exceptions, but I will not discuss them in this post.

How to find Yogkarak Planet in your birth chart.

Go to this website and create your Birth chart. Open the “Lagna Chart” and you should see something like this 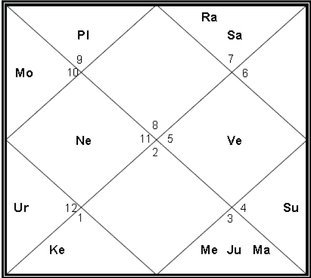 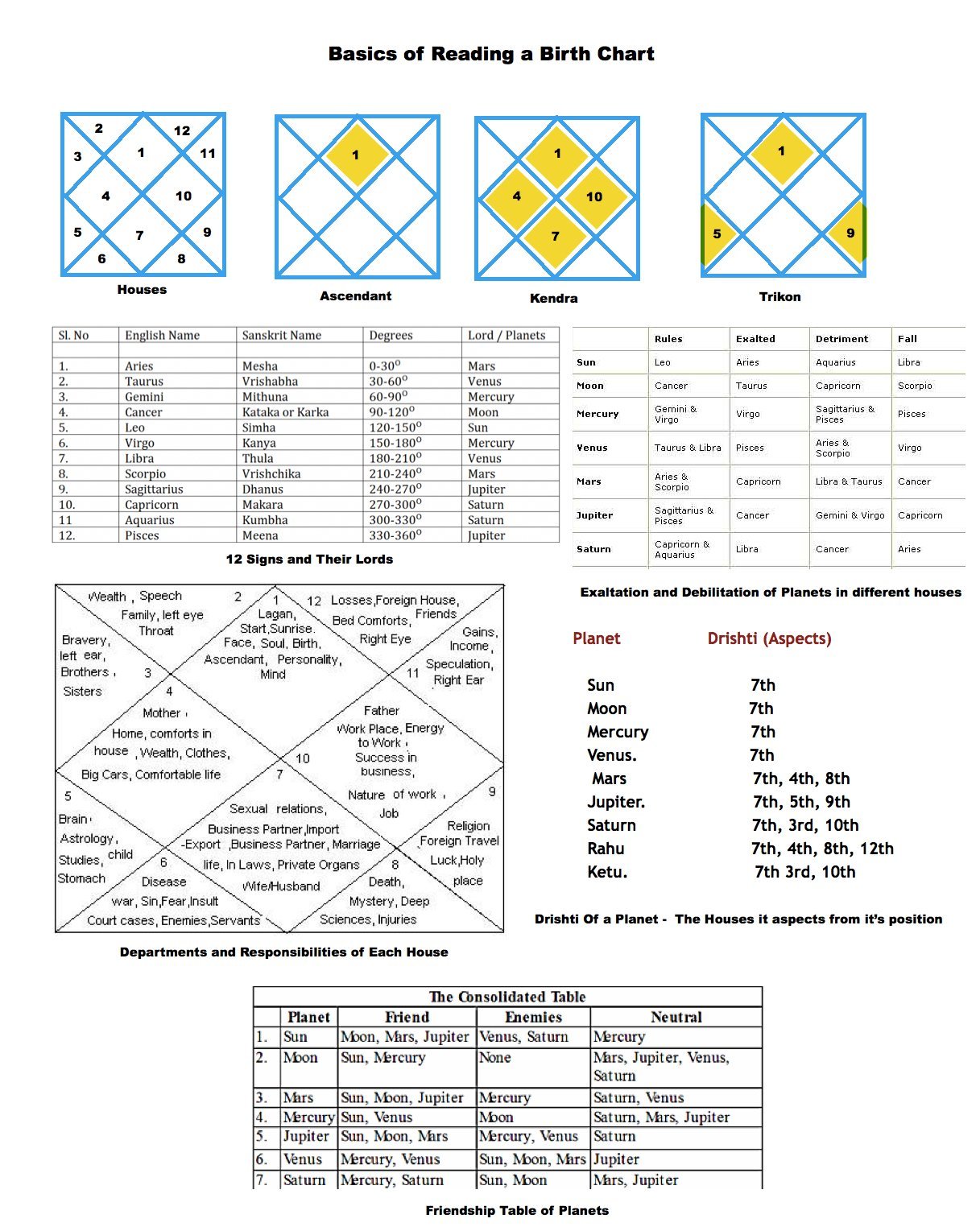 Now here is how you find your Yogkarak planet –

If all the above conditions do not hold, then no planet is Yogkarak in the birth chart.

Here is her birth chart 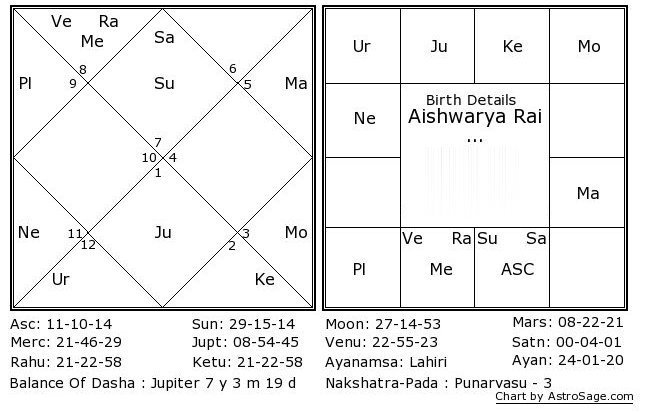 So we can clearly see that

Out of all these planets, Saturn is the Strongest.

Saturn will shower all his power in her chart, followed by Venus and then Jupiter and then Sun. Note that Sun is debilitated in her chart, sitting in the sign of Libra where Sun is weakened. However, in the same sign of Libra, Saturn is exalted and enjoys power. This Saturn being the Yogkarak planet and that too sitting exalted in the 1st house (Ascendant) and that too aspected by another Yogkarak planet (Jupiter) from the 7th is an extremely rare combination. This Saturn is so powerful that it will outcast the effects of a debilitated Sun.

Sun means name, fame, power, prestige and good will. According to vedic astrology, this person should not be famous because the Sun itself is Debilitated in Libra. However, this is where Yogkarak planet plays his magic.

Saturn sitting exalted in Libra and being a Yog Karak planet will negate the effects of a debilitated sun. This also creates a situation of “Neech Bhang Raj yoga” where a debilitated planet sitting with an Exalted planet of the Enemy sign creates a “Raj yoga”. The Sun’s power is amplified thanks to the Neech Bhanga raj Yoga and there will be no dearth in her fame, reputation, goodwill and popularity.

The birth chart of an Oppressor – Adolf Hitler

Adolf Hitler is also very famous but unlike Aishwarya, he is famous for all the wrong reasons. Let’s find out Yogkarak planets in his chart.

So the yogkarak planet in this chart is Mercury.

Where is the Yogkarak planet in this chart – it is in the house of Aries, the Eighth house. Eighth house is the worst house of the chart which signifies death, injuries, mysteries, secrets, deep sciences.

Adolf Hitler has an exalted Sun in Aries and Mars sitting in his own house. This signifies that he has the chances of becoming a well known commander, or adminstrator or “Senanayak”. Sun and Mars are friends and Mars sitting in Aries with an Exalted Sun is generally found in the charts of Colonels, Admirals, Army commanders. Mars signifies Aggression and Sun signifies Fame, so no doubt Adolf Hitler will become famous for his military rampage.

However, the Yogkarak planet Mercury is sitting in the same house where Sun and Mars are sitting. All these planets occupying the 8th house – the house of death. Here the Yogkarak planet Mercury, which signifies Intellect, mind and wisdom will direct all the energy to destructive causes. The subject’s mind (mercury) itself is channeling the energy towards destruction. Mars is channeling the energy of the planet to War while Sun is making him famous. This is because the house itself is the house of death and the presence of Yogkarak planet along with an Exalted Sun along with Mars sitting in his own house will amplify that effect a million times.

I pray to the Sun, the day-maker, destroyer of all sins, the enemy of
darkness, of great brilliance, the descendent of Kaashyapa, the one who
shines like the japaa flower.

I pray to the Moon who shines coolly like curds or a white shell, who
arose from the ocean of milk, who has a hare on him, Soma, who is the
ornament of Shiva’s hair.

I pray to Mars, born of Earth, who shines with the same brilliance as
lightning, the young man who carries a spear.

I pray to Mercury, dark like the bud of millet, of unequalled beauty,
gentle and agreeable.

I pray to Jupiter, the teacher of gods and rishis, intellect incarnate, lord
of the three worlds.

I pray to Venus, the utimate preceptor of demons, promulgator of all
learning, he who shines like the fiber of snow-white jasmine.

I pray to Saturn, the slow moving, born of Shade and Sun, the elder
brother of Yama, the offspring of Sun, he who has the appearance of
black collyrium.

What happens is that you are actually inviting your Yogkarak planet to come and relive your problem. The Yogkarak planet is your best friend and it will do whatever it can to help you recover from any crisis, trouble or dangerous situation.

The reason Hanuman chalisa works – Hanuman is the only avatar of God (Shiva) which has the blessings of all the planet lords. The legend goes like this – Indra had fired his Vajra towards child Hanuman and this angered his father – Pavan Dev. He refused to provide any more air to planet Earth which would mean the end of life on planet.

It is that time when Indra came with all the lords and blessed Pavan Putra Hanuman with weapons, knowledge and gave him boons – that no planet will be able to show any negative effects, if someone chants your name every day. This is one of the reasons why Hanuman is also called “Sankatmochan”

If you chant the mantra of Hanuman 108 times a day, it will produce the same effect as worshipping your Yogkarak planet but to a slightly lesser extent. If you can’t chant Hanuman chalisa 108 times, simply download the audio as an MP3 file and keep listening to it, it will remove obstacles tensions and other miseries from your life.