We have a reader question by Ankita

In present day, we see excessive female oppression in Indian society. Has it always been this way? What does the Vedas state about the position of women in society, family, industry or any generic place? Was oppression of the other sex always a norm in the culture? If Yes, what is the reason? If No, why do we see this behavior prevail in our culture?

The post vedic culture has had a high regard for the position of women in society and family. Careful study of Indian mythology will reveal that every Guna is associated with a Goddess and not attributed to a male God. Laxmi (wealth), Saraswati (Knowledge), Durga (Power), Kali (Anger) are some examples. This gives us some hints that the manifestation of an attribute was identified through a female, not male.

We have Vishnu, Siva and Brahma as the three major male gods. We also have Indra, Yama, Vayu, Agni, Varuna, Yama and other male gods but none of these male gods have any attribute associated with them. They all perform some fixed tasks. Someone destroys, someone preserves, someone creates, someone is the king of the heaven and so on. However, we see that every Goddess has an attribute associated with her identity. The Goddess is the giver of some “Guna” (quality) while the God is just doing some task (action).

We have countless number of examples in Vedic culture where women were known for their merit, intelligence and valor. Gargi, Savitri, Maitreyi, Sita, Draupadi, Anasuya, Mandodari, Gayatri… one can go on and on with such examples.

There is a quote in Atharvaveda

Guardian and Leader – Domestication and  Guardianship

The Sanskrit words used by the husband for the wife were

This is how ancient Vedic culture viewed the partnership of man/woman.

The male specie needs to be domesticated, because it is the male who has the energy and power to cause disruption. The male is domesticated through a mother, then a Guru, then a Wife. There is always a leader who shows the right path to a male.

So what caused the decay in these principles?

Unfortunately, these principles have slowly been forgotten due to influences of invaders, foreigners who ruled the country both militarily and culturally.

The oppression started after Mughals entered the country.

They captured the country and would take women as “War Prize”, thereby exploiting the spiritual and ethical standard of the society. Mughals were the first foreign rulers of India who severely damaged Indian culture, manipulated the history, destroyed ethical/ social standards to meet business and monetary objectives. If you observe a country with high Muslim density, you will know that women do not enjoy freedom there. Nowhere in Indian history we see such examples of Barbarism and tyranny. The history of Indian culture that you read today has survived some of its parts through the extreme manipulation caused by Mughals, followed immediately by the Europeans.

Geographically, as we move from the northern to the southern part of the country, we see lesser occurrences of crime against women. Women in southern India enjoy more freedom, literacy and employment rate is higher. Dravidian culture has still retained the principles since it was not as influenced by foreign oppression. People in Northern, eastern and western India are a cross breed of Mughals and Aryans, which is why so much cultural diversity exists in those parts.

Region of Mughal Influence in 1700. Notice the parts in Tamil Nadu and Kerala haven’t been conquered. This is not because they could not conquer it with power. This is because they found it difficult to culturally dominate this part of the country.

Here is a sample map of crime, note the region of Mughal influence and how the crime rate decreases as we move to the southern part of the country (almost negligible in Tamil Nadu and Kerala) 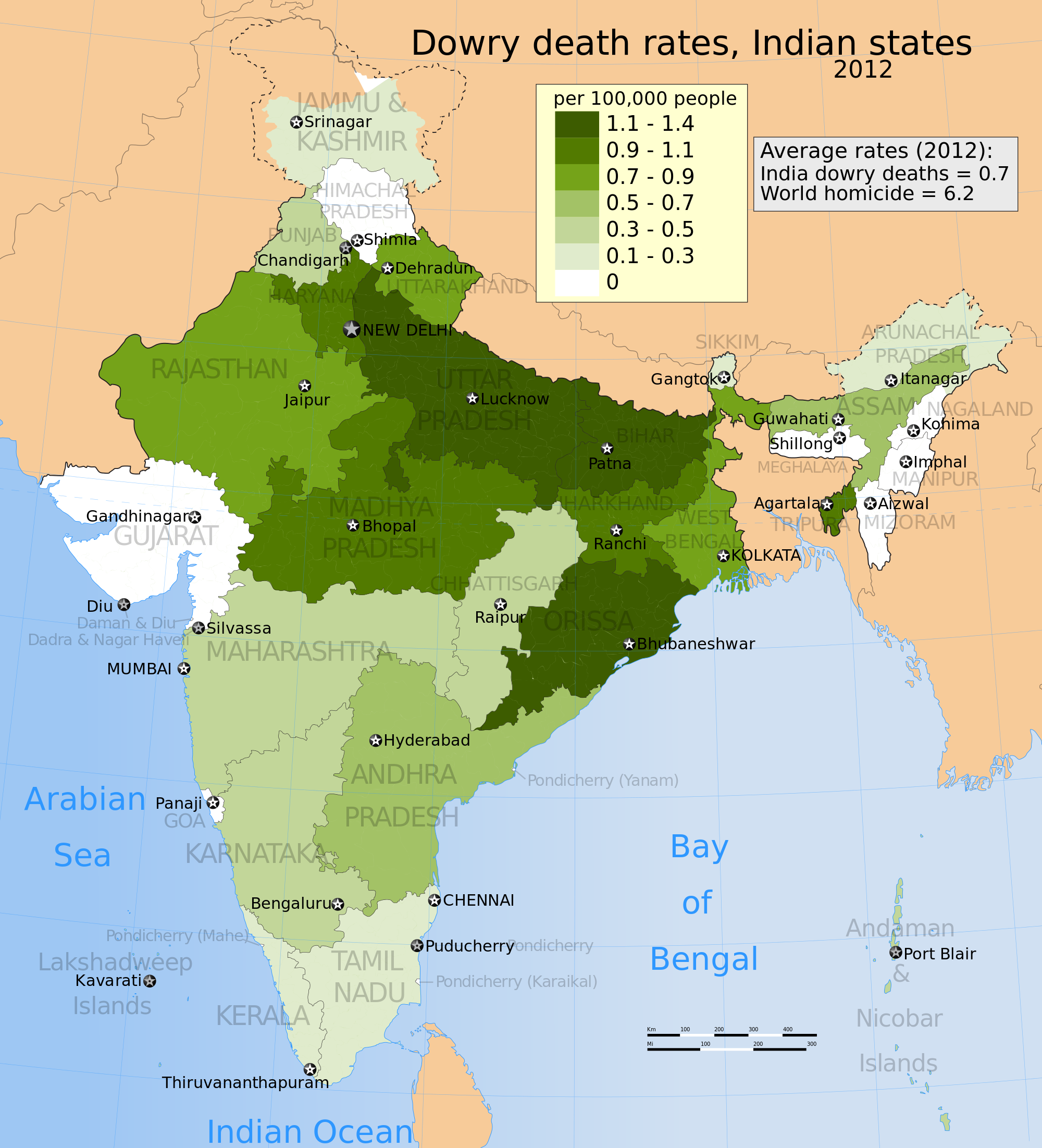 Dravidians (specially Tamil Nadu and Kerala) were able to retain ancient Indian principles in their social structure. Their language, lifestyle and belief system have not been polluted as much and hence, we see more prosperity and harmony in these states. I have myself lived in Chennai and Bangalore and I have also lived in Calcutta and Delhi. The difference in the belief systems is quite intense and no wonder people in Southern parts of the country are more humble, courteous and repel sexism in their culture. There is less political anarchy and more focus on education, employment.  If you want to know the values and beliefs of a primitive Indian, study Dravidians.

Since there is a shift in the belief system of the society due to external influence , women were viewed as objects of gratification or some property that needs to be possessed, controlled and exploited. This culture has prevailed to this day, unfortunately.

This is the result of a Rakshasic cultural influence, which still continues to grow as materialism expands in society. Money and sensual gratification have become major goals in life. The members of the society take pride in obsequious flattery, drinking and swaggering around. We are reckless fools who are following whatever is drummed to our ears by people who want to achieve their business objectives, we believe them and do whatever is shown as “Lucrative trend”.

We do not want to know our real culture, we seldom read the scriptures, the Vedas, Upanishads and we are more interested in knowing and following what is shown in Television. From clothes, to foods, to Jobs to Education – everywhere there is foreign influence. This is nothing but Slavery on a cultural front and eventually, we will forget the value system taught through Vedas and Upanishads.

It is a strict regulation in Vedic culture not to be materialistic, to lessen desires, to attain self control. We see the opposite happening. Everyone is chasing material goals in Life and none is happy. Everyone is developing more desires in their head, hoping to find happiness and fulfillment and in this pursuit, converting into a hollow barbaric animal.

This is happening because people do not have “Real knowledge”. What people have is “Commercial knowledge”. Some sort of “Degree” which gives some ROI in a business and material driven world. So you can manipulate this world and attain more money/material things (not thoughts).

Since money and possession has become the Goal of majority, education and upbringing has also become commercial. Commerce doesn’t care about “Values”, commerce cares about “Profit” and “Profit” alone. Hence we have become objects of a commercial process and hence we are becoming a “Rakhshas”.

Either acquire or Destroy – do not let others enjoy what I desire.

This whole philosophy of acquiring by the “Purush” (male) will destroy “Prakriti” (female). The warnings are already showing and this situation will get worse with time. It has been prophecized  in the scriptures that the ratio of female per male will decrease significantly in Kaliyuga. Man will convert into a Lion and kill its own child right after birth (female foeticide).

O ruler! (Yuddhisthira) the lineage in which daughters and the daughters-in-law are saddened by ill treatment, that lineage is destroyed. Duryodhana has insulted Draupadi, he will eventually meet his doom.

Just have a look at the countries where the position of women was alarmic and what happened to them. Afghanistan, Iraq, Somalia, Egypt are some recent examples – they were destroyed.

This is Kaliyuga and destruction is imminent. This land will gradually convert into a perilous place if we (males) are not careful.