We have another reader question by Srikanth,

We have many stories in Hindu Mythology where Rishi’s curse others and even Gods. Why do they curse.? Aren’t they spiritually elevated? Cursing and punishing others are attributed to normal human beings. Are they normal then? On what grounds they differ? They don’t have any other ways rather than to curse?

Great question. Let us break this question into different parts

— Why do Rishi’s Curse?
— Aren’t they spiritually elevated?
— How does a curse relate with an elevated soul (Rishi)?
–  Is there any alternative to curse?

A Curse is not a bad thing 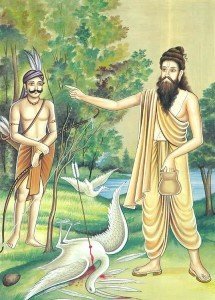 First of all, a curse is not at all a bad thing. Neither is boon a very good thing. Good and bad is on the subject and his point of view.

A curse and a boon is just a “Cause” given to the subject by the elevated soul. A curse or boon can be delivered by Gods, Rishi, a Brahman, a mendicant or anyone who has liberated his mind.

A mendicant can curse you. There are stories where a beggar in his rags has cursed a King and the King had to go through penance in order to mitigate the curse. The King is powerful but the King knows that the beggar has achieved the “Brahman” and hence his curse will fall on him someday.

Why do Rishi’s Curse?

When a Brahman observes that a subject is straying from his Dharma and his actions can cause imbalance to this whole universe, he delivers a “Curse”. His intent is to use his powers to give the subject a cause, so that the subject can rectify his actions and universal balance is restored.

In Ramayana, Ahalya was cursed by Gautama because of Adultery. She turned into a stone and was later free’d by Ram. Gautama observed that the subject is straying from her path and causing imbalance in this universe. Hence, he gave a “Cause” to Ahalya so that she turns into a stone, goes through a disciplined renunciation process and liberates herself. The liberator is Ram, someone who uplifts the subject when the renunciation is over. This is called “Udhaar” (the liberator).

In Mahabharata, Urvashi curses Arjuna. Urvashi observes that the man is straying from his Dharma, he is rejecting a woman on personal moral grounds which is directly against the law of nature. If a chaste woman approaches a man for carnal desires, it is the duty of the man to satisfy her needs. If the man refuses, he is a direct threat to civilization and must be cursed, so that he learns his mistakes and comes to the right path. In that Yuga, it was a huge sin to reject a woman who deserves a man. Hence, the curse was delivered to give Arjuna a “Cause” so that he goes through a rectification process (Brihanalla) and balance is restored. As it turns out, this curse helped Arjuna in the bigger picture.

In the same way, Rishi’s deliver curses to restore balance into this universe by giving a “Cause” to the subject. Nothing more, nothing less.

This has nothing to do with spiritual progress. This is all about “Balance”.

In our day to day lives, we are cursed by someone or the other. You just have to observe it meticulously, you will see hundreds of curses around you.

There is no alternative to curse. Everyone can deliver a curse, so long as they are on the path of Dharma.

If a neighbor breaks the wind shield of your car through a stone, it is his duty to restore it. It is your duty to remind the neighbor if he is reluctant. You remind him thrice and if he disagrees, you are free to give him a curse. How you deliver the curse is completely up to you. You will not incur sin by delivering the curse since through your action, you are actually helping the subject achieve “Brahman”.

This will generate “Punya” for you and you will earn “Equity”.

In short, a “Curse” is just a cause delivered to the subject so that he can identify his Dharma and come to the right path, so that balance is restored and peace is upheld.