After Bheesma’s death, Dronacharya became the commander in chief of Kaurava army. Dronacharya is an formidable warrior who must be removed to secure victory for Pandavas.

Krishna told Pandavas that it is impossible to get rid of Drona, so long he is armed. Drona is the only warrior in battlefield who has Brahmastra and Divyastra, even the gods cannot fight with him. Only Arjuna can  counter his weapons but not remove him, Arjuna being his favorite student.

Hence, Drona can only be pacified when he is unarmed.

In today’s battle, nobody can defeat acharya Drona. The only way to remove Drona is to convince him that his son, Aswathama is dead. Acharya Drona has only one weakness – his son. If he believes that his son is dead, he will drop his weapons and then we can get rid of him.

I beg your pardon. But I cannot use unfair means to kill my teacher and I do not want to win this war at the cost of incurring a sin.

Who are you to win or lose this war? Your dharma is to fight against Adharma, so just do the task given to you. Don’t do imaginary analysis of the result, because you have no control over the result

But I cannot kill my teacher using unfair means. This is something I will not do since this is a violation of the “Guru- Shisya” pact.

If there is anyone who can help Dharma today, it is you. You are the epitome of Dharma and Righteousness and hence Dharma is looking upto you for an answer. Ironically, you will have to tweak Dharma to restore it. Will you help?

If no other way to restore Dharma is open, I will carry the weight of this sin on my shoulders.

Krishna to Bheema, pointing towards an Elephant

Do you know the name of that Elephant?

I do. His name is Aswathama.

Bheema goes ahead and kills the Elephant. Then he moves to the center of battlefield and announces that he had killed Aswathhama. 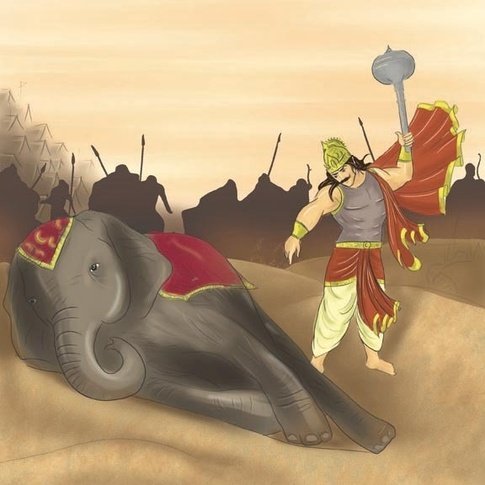 A distressed Drona, refused to believe him. He turned towards Yudhisthir.

I have not come here to seek your blessings, O Yudhisthir. I have come here for the truth. Is it true that my son, Aswathama is no more?

Yes Aswathhama is dead (and then he murmured). I don’t know if its a man or an Elephant.

A shaken Drona lost the will to fight. He listens with half ear and lost the will to live. He dropped his weapons and sat down in deep meditation. His soul went on in a journey across the heavens in search of Aswathama’s soul.

This is the moment of truth. It’s now or never, we must act now and kill him.

But Drona is a teacher and a renowned Brahman. To kill a Brahman is the greatest sin of all. “Brahman-hatya” is a sin which has no penance and hence, none of the soldiers could gather the courage to kill an unarmed Brahman who has laid down all his weapons and is meditating.

He is Brahman by birth but a Khastriya by Karma. He had taken the path of a Khastriya for vengeance against his friend Drupad. He lived as a Khastriya for wealth, power and recognition. Had he been a real Brahman, he would have won his anger over Drupad and forgiven him. But No, he did not. He has lived all his life training princes of the royal clan, so he can use them for his personal vengeance. He has already achieved his vengeance by killing Drupad earlier this morning.

Look at him. His soul has already left the body in search of his son’s soul, Aswathama. Hence, there is no killing, just the decapitation of a lifeless body. There is no crime in beheading him now, for he is a barrier to Dhrama.

Dhristyadhumna, the commander in chief of Pandava army, jumps from his chariot and beheads Drona.

When Aswathama learned the death of his father, he went outraged and released a dangerous weapon – “Narayana-astra”. This weapon can never be stopped by any other weapon and anybody who tries to counter this weapon would certainly die.

Now that Aswathama has fired Narayanastra, we are all going to die.

Just drop your weapons and salute it. This weapon will do no harm if you do not counter it.

On the instruction of Krishna, all the soldiers dropped their weapons except Bheema. Bheema hurled his mace and ran towards Aswathama and since he was armed, the Narayanastra enveloped him. Krishna ran for rescue and pulled the mace from his hands. The Narayanastra withdrew, since it would not harm anyone who was not armed and hostile.

Aswathama could not use Narayanastra since it can be used only once.

The grief of Arjuna and vengeance against Dhristyadhumna

Arjuna was the favorite student of Drona and he could not bear his Guru’s death. He jumped from his chariot and ran towards Dhristyadhumna in an attempt to kill him.

I will not forgive you Dhristyadhumna for unfairly killing my Guru Dronacharya. I know you are my brother in law but I have to do the duty of a student first. You are a coward who has killed a Brahman when he is unarmed. I am Dron Shisya Arjuna and it is now my duty to kill the murderer of my Guru.

When the war finished for the day, Arjuna becames restless and plans to kill Dhristyadhumna. This is when Draupadi comes to the rescue

My brother has not commited any crime. Why are you so restless?

Nobody in this planet holds the right to kill my guru using unfair means. So long as I am alive, so long Gandiva is in my hands, Mahadev ki saugandh, I cannot let the murderer of my Guru remain alive.

If you cannot protect your own wife and punish the person who sits in the court and observes the practice of Adharma with deaf ears, please do not try to be an obstruction in the path of other people who do it. He may be a guru to you but to me, he is just a coward. He is the coward who led the army that killed your son Abhimanyu, when he was unarmed.

You are his favorite student and you seek vengeance against my brother Dhristyadhumna. Please wait. Let this war be over. Let all the Adharmiks die first and let me get my vengeance which I deserve. Let me tie my hair first. Let Bheema fulfill his vow first.

Once I have received my vengeance, you can work towards getting your vengeance by killing my brother. So long as I am your wife and my hair does not get the blood of Dushashana and Duryodhana’s thigh is not broken, you have no right to seek vengeance against the commander in chief of the army which is working towards your wife’s vengeance that she deserves. You have no right to overshadow Bheema’s vow. Let us seek what we deserve, you can fulfill your personal enmity later.

During the cremation ceremony of Drona, Aswathama pledges to become the reason for the destruction of entire Pandava clan, which he later fulfilled by firing his Brahmastra towards Uttara’s womb.