The same man who loves to eat Butter chicken every day will try to save a bird that has been attacked by a cat. So the man’s consciousness tells him to save the injured bird from the cat but his consciousness fails to recognise that he is the one who killed a chicken for his own meal.

A man visits a temple but does not stand in the long queue. Onlookers may interpret this behaviour as laziness, apathy or ignorance. However, it is possible that the man has a higher degree of consciousness and he is deriving the same value by not seeing the diety which everyone wants to see a glimpse of. His consciousness tells him that worshipping is important, not the show of worship.

A Kosha is simply a layer which covers a spirit. A “Kosha” means layers and stages of human consciousness.

There are five “Koshas” or stages of human consciousness – 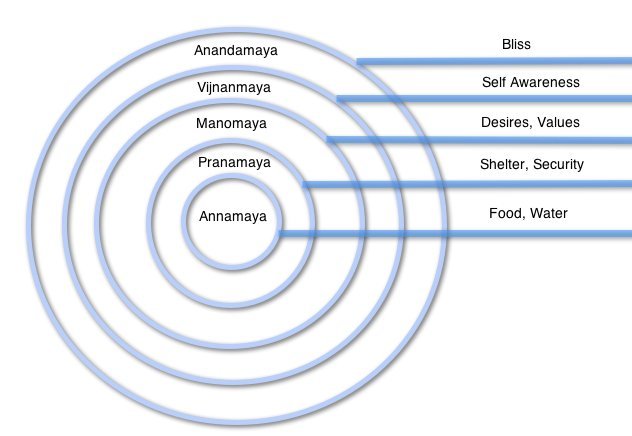 The first layer is the sheath of Food.

At this stage, the subject is concerned about having enough to eat. The baby needs just mother’s milk and some sleep to feel happiness. This is the primary need of any subject and a subject which does not evolve beyond this need is said to be in the “Annamaya” consciousness level. These subjects do not see a spectrum of things since their sight is mostly focussed on one thing – Food. Eat and survive, that is all.

The second layer is the sheath of Life. At this stage, the subject becomes concerned about continuing to exist by protecting or defending itself from being attacked or destroyed. In this stage, the subject is happy but there is a condition – there must not be any life threatening event or situation which may disturb his existence in any way.

Many people have the fear of losing their jobs or incurring loss in business. This signifies the fear that exists in the “Prana maya” stage. When you lose the job, you feel threatened since your survival mechanism ceases to exist for some time until you figure it out. When you lose money in business, you feel anxiety and remorse – your survival condition is overruled. You feel attacked.

People living in this consciousness level: People who have some means for providing but not enough to feel secured, should they stop working or the work goes out of hand. This constitutes people who do jobs, farmers, workers who work and earn to fetch enough for themselves. They always try to make themselves feel secured and any loss in their livelihood causes them severe anxiety, depression and distress. People in the working class constitute majority of the people who have this consciousness level – to feel secured.

The third Kosha is Manomaya.

This is that level of consciousness when the subject becomes involved in figuring out his desires and values, what he wants to be, what kind of work he wants to do to make a living, whether he wants to study subject A or subject B, whether she would look good in a gown or a skirt, what phone should he buy and so on. This is that sheath when the subject needs to add mental stimuli to his/her life in order to experience happiness.

People living in this consciousness level: People who have enough for themselves, know how to earn a living, have enough property that makes them feel “Secured”. This constitutes people who need not worry about meeting basic needs or maintaining a secured life. Their orientation is towards meeting mental needs e.g Entertainment, status, passion, fulfilling imagined desires, earning more money, a new car, long vacation and so on. These people are mostly trapped in mental desires and a mere disorder causes them pain and suffering. In general, these are the people who have a nice house to live, a good job or business to make ends meet, a family, some property but they still don’t find happiness. They need fulfilment of their imagined desires in order to experience happiness. The son of a millionaire wants to become a Billionaire, the son of an actor wants even more reputation, the son of a politician wants to become a minister and so on.

Need: Food and Security and Desires

These are the three stages in which most of the society is absorbed. Most people never evolve beyond these three sheaths and continue to live their life in the illusion of happiness, sadness, profit, loss, money, relationships, material things, security, food and so on.

This is the fourth sheath which signifies self awareness.

This is that level of consciousness where the subject is aware of his own identity, knows why he exists and what is his role in this universe. This is that stage when the subject questions his purpose of life and goes beyond selfish desires of existing and maintaining modes of enjoyment.

In this stage, the subject doesn’t care of food, security or fulfilling desires. He knows that he will get food in some way or the other and that being secured is just an illusion. He also knows that desires are deceptive and he has overcomed those illusions and has arrived at the fourth stage of “Vijnan” (self awareness).

People living in this consciousness level: People who know who they are and why there are here. The thinkers, philosophers, people who had valuable contributions for human kind. These people are very few in number and are often tied to an objective which serves the greater cause, not personal ambitions.

Similarly, the guy who sweeps your neighbourhood and continues to diligently sweep it everyday, regardless of the salary or the praise that is given to him. The man who devoted 22 years of his life to cut through a mountain. That teacher in a village who teaches poor kids for free, year after year, decades after decades. That doctor who sacrifices personal ambitions and continues to serve the needy. That soldier who stays awake and survives inhuman weather conditions to protect his countrymen. That social worker who gives up his/her personal life for a cause.

This is the fifth and ultimate sheath – Anandamaya.

If a subject continues to develop through the Vijnanmaya stage and evolves into spiritual knowledge to an extent where nothing matters to him, understanding that he is not the body, neither his own imagination but the soul within. The person who is in search of eternal truth and devoted to the supreme, one who tries to understand his relationship with God or universe, is said to reach the Anandamaya stage of bliss, spiritual knowledge and eternity.

One who reaches this stage is forever free’d from material existence and is liberated from the vicious cycle of birth and death, pleasure and suffering and returns to spiritual atmosphere.

People in the “Anandamaya” stage are generally not known by the people who continue to live in the material world.

The evolution of human consciousness goes through these five levels of which, most people experience up to 3. The fourth and fifth level is extremely hard to reach and it takes an elevated soul to achieve the fourth and an even elevated one to liberate oneself into the Fifth.