Arjuna is one of the most egoistic character in Mahabharata, if not as presumptuous as Duryodhana. Duryodhana is foolish, stubborn, egoistic and arrogant. His ego is for all the wrong reasons. Draupadi is egoistic and prepossessing but it is Arjuna whose ego and credence knows no bounds. He considers himself as the best archer and his ego is amplified by the praises of Bheesma, Drona, Krishna and other warriors of his time.

Whoever counters Arjuna is either humiliated or defeated and this results in the amplification of his ego and self esteem. Karna is the only archer who counters Arjuna in different battles but since Karna is fighting on the side of Adharma, his luck is dormant. Karna is equally skilled and talented but since he fails to overpower Arjuna, Arjuna considers this as his superiority over Karna and rejects his abilities.

When Arjuna prepares to leave for heaven and collect divine weapons, Indra decides to teach his son a lesson. He comes to Arjuna and tells him that in order to obtain divine weapons, he will have to first please Lord Shiva and obtain Pashupatasthra.

Indra tells Arjuna that unless you obtain Pashupatasthra, you are not eligible to enter Heaven. Your guru Drona has divine weapons and even the Gods cannot fight him. Shiva will be pleased to give you his Pashupatashtra so that you can counter Drona but in order to obtain divine weapons, you must first please Shiva.

Arjuna then begins his ghor Tapasya and starts pleasing Shiva.

One day while Arjuna was meditating in the jungle, a wild boar attacked Arjuna. Before the boar could reach Arjuna, he stood up and fired an arrow to seal the animal’s fate. He later discovers that there are two arrows on the dead boar, which means someone else had also fired his arrow, other than Arjuna. 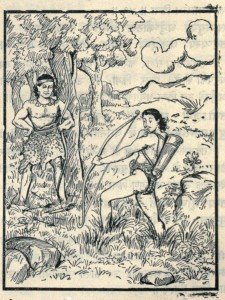 In some time comes a tribal hunter who claims that this is his kill and he deserves the right to take the kill with him.

But this is my kill. This boar attacked me and I killed him to save my life. I only have the right to this kill.

No young man. This arrow is mine and so the kill is also mine. I fired my arrow before yours. You take your arrow and go away.

When Arjuna fires his arrow, no other arrow can reach the target before his. If you have any love for your life, take your arrow and depart right away.

Arjuna? Who is this Arjuna, I don’t know any Arjuna.

Arjuna is the student of the famous sage, Sage Drona. I am that Arjuna and you cannot beat me in archery. Hence, do not involve in unnecessary fight and go away.

Drona? Who is this Drona? I don’t know any Drona or Arjuna, what are you talking about?

When Arjuna’s arrows rain on the enemy, it spreads fire. This Fire destroys warriors just like sun destroys dry grass through its heat. Beware o foolish man, you don’t know you are inviting your death.

I am not speaking out of ego or self pride, I was just telling you who I am.

No, young man. You are swimming in ego and false pride. I don’t care of any Arjuna or Drona and I am going to take the kill with me.

Arjuna then prepares to attack the hunter but Alas, the hunter fires a volley of arrows and traps Arjuna. Arjuna, helpless and accepting his defeat, tells the hunter

Only 4 has the merit to beat Dron sisya Arjuna. Bheesma, Drona, Indra and Shiva. You are not Bheesma, neither Drona. You must be Shiva.

I know my father well. He only told you to meditate on your name. Please show me your real identity.

Shiva then shows Arjuna his real identity and says

Rise, son. You have proven that you are a worthy archer indeed. A befitting pupil to the great Drona. I know what it is you seek and I now grant it to you. Keep in mind, though, that the Pashupata Ashtra is never to be used on a weaker opponent. Nor should it ever be mounted in vain or used for any purpose other than the protection of righteousness. Any violation on your part may lead to the astra being lost forever from your system. Rise, son and gain this, My Pashupataastra. May you use it wisely and only when in need.

Moral of the story

The crumbling of ego is necessary before the soul can take up bigger and broader challenges in life.

The gods come down on earth and break the ego of Yudhisthir, then Bheema and then Arjuna. This is necessary because you can not win a difficult battle with ego flying over your head – dictating your mind and actions. The soul must be free from all ego and self pride and only then it becomes eligible to receive the “Kripa chaya” of Gods, the divine self.

We, the mortals on this earth are no different than Arjuna or Bheema.

We have certain skills that we are extremely proud of. We belong to some institutions or organizations and we take pride in claiming that I was a student of this school and I have worked for so and so organization. But there is no glory attached to your action if you have ego sitting inside your head. You must tear that ego apart since the ego is not real, the self is real and only the self is worthy of worship.