Because of mother Kaikeyi, elder brother has to go to forest for 14 years exile. It is not his fault. She has tricked the King to grant her a boon, she wants her son to rule the kingdom. Now there is nothing much we can do here. Sita will also accompany elder brother in the jungle and I have to go. There is no way I can abandon my brother. 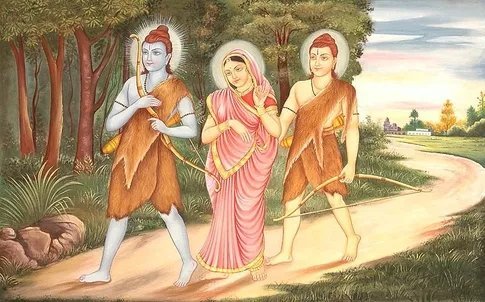 You want to come with me, you can come. But remember, I will not be able to serve you since I have to serve my brother and his wife first. Also, after Sita, you are the eldest “vadhu” in the family, so it is your duty to take care of the family, elders and in laws in our absence.

Hence, you should stay in the palace and I should accompany my brother in the jungle. I know this separation is going to hurt both of us but this is the call of Dharma.

Oh my beloved Husband, how will I sustain without you for 14 years? Elder sister Sita will be in jungle with her husband. I will be in palace without my husband. So my situation is more miserable than her? What is my fault?

Now Lakshmana is in “Dharmasankat”.

This is when “Needra”, the god of sleep comes to the rescue. He makes a pact with Lakshmana

Lakshmana kills Meghnad, Sita is rescued and both the brothers return to the Kingdom. Now here is the ironical part.

When Rama is crowned as the King, Lakshmana says:

“Now I have to go to sleep, as per the pact made with god Needra. And when I go to sleep, my wife will awake from her sleep. I spent 14 years in the jungle protecting my elder brother but now I cannot attend his ceremony. Also, I won’t be able to have the company of my wife because now I have to sleep for 14 years and she will be awake. This is called Fate”

Lakshmana later commits suicide in a jungle for a different reason.

Further reading: “Saket” by Maithili Saran Gupta where the author describes how her life goes through a turmoil and why Lakshmana and Urmila could never live together, her unparalleled sacrifice was overshadowed. Urmila and Lakshmana fought a greater battle compared to Rama and Sita and were never recognized, eventually forgotten.