We have a question from Rajiv,

In Mahabharata, wasn’t Drona, Karna or Aswathama capable enough to stop Abhimanyu on their own? How can a 16 year old boy cause so much fear in Kaurava army, especially when the commander in chief is Drona himself, whom even Arjuna cannot beat. Drona alone could have stopped him, what caused the situation that he was unstoppable on that day and had to be mercilessly killed by 7 warriors?

There is a slight myth associated with Abhimanyu, that he learned the entry into Chakravyuh while he was conceived in the womb of Subhadra. That is true but not the entire truth.

Abhimanyu learned the formation of Chakravyuh while he was in the womb, when Arjuna was telling Subhadra how Chakravyuh is formed, the characteristics, the gates, which Maharathi guards which gate, what happens when one gate falls and other things. However, the intricate details of  entering and maneuvering inside Chakravyuha was taught to Abhimanyu by Krishna, not Arjuna. Arjuna was not at all aware that Abhimanyu knows this secret thing from Krishna. 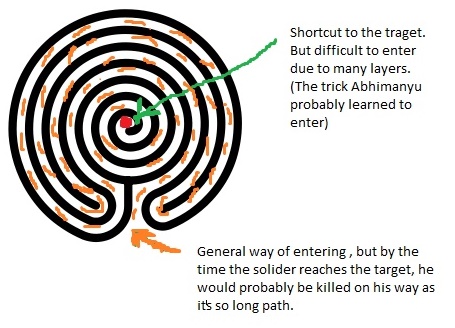 Krishna and Satyaki together trained Abhimanyu. Only five had complete knowledge of entering and cracking Chakravyuha – Drona, Aswathamma, Arjuna, Krishna and Pradyumna (son of Krishna and Rukmini). Drona had taught Arjuna how to enter Chakravyuha and crack it but it is Krishna who taught Abhimanyu a different approach of getting inside Chakravyuha, which even Arjuna did not knew. Abhimanyu would secretly practice it with Krishna and Pradyumna and this gives Abhimanyu an upper hand over Drona and Arjuna, the knowledge of a different way to attack a problem which the other player is not aware of.

There are multiple ways of attacking a problem. Drona had taught Arjuna that one way of attack but not all ways. However, Drona is in complete dark that there is another guy in the enemy camp who not only knows his way through an indirect form, but also keeps a workaround in his kitty which he himself is not aware of.