Here are some interesting facts about Draupadi

1. According to many folk tales, Draupadi was secretly in love with Karna. She admits to Krishna that she had a soft corner for him. Folklore states that Krishna had sent the perfect husband for her (Karna) – one who would love and protect her all her life and be faithful to her. But she rejected him because of his apparent low birth. So she ended up marrying a man who shared her with his brothers and failed to protect her when she needed him the most.

2. Of all the Pandavas, Bheema loved Draupadi the most and it was Bhima who protected her every single time.

Duryodhana and other kings were very angry –

“This princess is from a royal family. Either she marries a King, or we will throw her to fire.”

Dhristhadhuymna, Draupadi’s brother jumps in to protect her with his sword but he is alone.

“She is now my responsibility, I will protect her.”

“I, pavan putra Bheema, husband of Panchali pledge that unless I drink the blood of Dushasana and break Duryodhana’s thigh, I will not show my face to my ancestors”

“O my beloved husband Pavan Putra Bheema, you are the only one who have given me all that a woman longs for. But I have been ignorant on you. I have been blind for Partha (Arjun) but you have protected me every single time and repaid me for the humiliation I had received. In our next birth, be the eldest.”

She weeps and dies in the arms of Bheema.

In the horse dance of Tanjore and some other folk dances in South India, the riders of dummy horses represent Bhima and Draupadi. 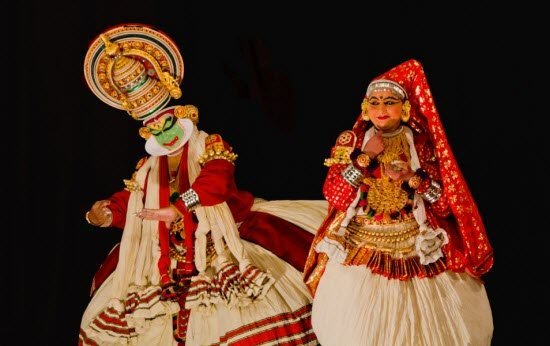 3. Draupadi’s effect on men is a recurring theme in Mahabharata. Besides, Duryodhana, Dussasana, Jayadratha, Kichak, there are other men who lusted after her. What is Mahabharata trying to tell us? Don’t be besotted by your looks, for they are likely to go against you.

4. Draupadi’s vessel was like Lakshmi’s “akshaya patra” (similar to the Greek cornucopia), always full of food. Across India, the term “Draupadi’s vessel” means a kitchen that is overflowing with the best of foods. Such a kitchen is the mark of a good homemaker (she is sometimes referred to as “Annapurna”). Mahabharata shows us the value of a good homemaker and that women should not be objectified for “LUST” alone.

5. Draupadi did not attend the infamous dice game where the Pandavas gambled away their kingdom and all their earthly possessions to the Kauravas, and this was the only time in the epic when the Pandavas took decisions alone – without their mother (Kunti), wife (Draupadi) or a friend (Krishna).

And they failed miserably.

The noblest of men (Yudhistira), the intelligent (Sahadeva), the powerful (Bheema), the skilled (Arjuna) and the handsome (Nakula) all fell flat on their face. It is because they ignored their wife.

6. Draupadi’s insensitive comments about Duryodhana’s parents is presented as one of the reason why she was humiliated later in her life. This event is narrated as a warning to people not to make fun of disabilities (especially elders).

7. In Tamil tradition, Draupadi is considered a Goddess and one “Muttal Ravuttan” is her loyal guard and gatekeeper. He is said to be a king whose daughter married Yudhistira. It was well known that Draupadi would not let any of the other wives of the Pandavas stay in the palace. Muttal actually offered to become Draupadi’s servant for all eternity just to ensure that his daughter would be an exception to Draupadi’s rule.

In other narratives, Draupadi allows only Subhadra to enter the palace as she was the sister of Krishna. Krishna was the “sakha” (best friend) of Draupadi who protected her modesty when she was being disrobed in the courtroom by the Kaurava prince Dushasana

All of her sons died in the hands of Aswathamma, who also happens to have killed her twin brother (Dhrishtadyumna).

Mahabharata is trying to tell us that “Every action has an equal an opposite reaction”. And that “a war of hatred” is not the solution.

Drupad insulted Drona. Drona, with the help of Kuru family conquered Drupad. To avenge this, Dhrupad sired Draupadi and her twin brother. In turn Draupadi was instrumental in killing Drona (her twin brother Dhrishtadyumna actually did the deed) and divided the Kauravas and Pandavas. Drona’s son Ashwathama then killed her brother and all her sons. Karma comes back, over and over again.

10. Only two Kauravas protested in support of Draupadi while she was being disrobed in the court room. Vikarna and Yuyutsu. Yuyutsu was the most learned Kaurav and secretly admired the Pandavas and Draupadi. He later changed sides and joined the Pandava army.

11. Draupadi is depicted as rather helpless in Mahabharata. However, she has been shown to be reborn as different heroines in her later births such as Vira Shakti (Tamil folklore), Bela and Alha.

12. Draupadi was the first to fall from the Himalayas when Pandavas were on their final pedestrian journey to heaven. When Bheema asked Yudhistira why she fell, he replied

“Though she was supposed to love all of us equally, she favored Partha (Arjuna).”