We have a question from Gautam,

Can you elaborate why Arjuna was also called Sabyasachi? How did Arjuna got his names and what are their meaning(s)?

Arjuna was called “Sabyasachi” because he could use both his hands equally. Arjuna revealed his names to Matsya prince “Uttar” right before the Virat battle and I will explain the context of their discussion below.

According to the terms of “Dyut”, the 13th year of exile had to be spent incognito by Pandavas, failing to  which they would have to resort to the forest for 12 more years. When the year of incognito came, Pandavas chose to enter the kingdom of Matsya and took up different positions in the courtroom of the King Virat.

Yudhisthir became a courtier called “Kank”. Bheema became a cook with the name “Vallabh”. Arjuna disguised himself as “Brihanalla” (making use of Urvashi’s curse). Nakul took the name of Granthika while Sahadeva took the name of Tantipala and took care of horses. Draupadi named herself “Sairandhri” and became the principal maid of Queen Sudeshna.

All was going well and the five brothers were successful in hiding their real identities. But alas, for Draupadi’s beauty could not be hidden from Kichak’s lustful eyes. Kichak was the commander of Matsya kingdom and he molested Draupadi in front of King Virat and his courtmen. 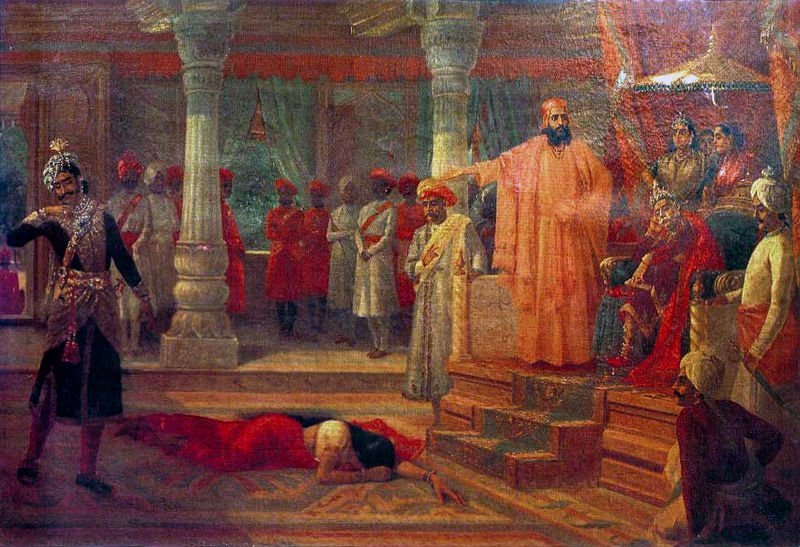 Since Keechak was the commander of the Matsya army, Virat king could not take any action against him. Yudhisthir, disguised as Kank, decided not to do anything in public because it would disclose their real identities.

When the news of Keechak’s death spread across kingdoms, it raised suspicion among the Kaurava warriors. Only 6 had the merit of killing Keechak – Balarama, Duryodhana, Bheesma, Drona, Karna and Bheema. None of the warriors in Kaurava camp had killed Keechak and neither Balarama had which made them doubt that only Bheema has killed Keechak.

The Kaurava army decided to attack Matsya kingdom so that they can reveal the real identity of Pandavas. In the same time, the Trigarta kingdom attacked Matsya Kingdom to seize territory in the absense of the commander, Keechak.

On request of his favorite courtman Kank (Yudhisthir), Viraat king took him, Vallabh(Bheema), Granthika (Nakul) and Tantipala (Sahadeva) with him. He did not take Brihannala (Arjuna) because he was disguised as a transgender individual, so the king disqualified him to be suitable for fighting a war.

After the King left with his army to fight the Trigarta king Susharma, the young Virat Prince Uttar was informed of the invading army of Kauravas. Uttar assembled the courage to fight the entire Kaurava army alone but on the request of Sairandhri, he agreed to take Brihannala as his charioteer.

On reaching the battlefield Uttar saw an overwhelming force of Kauravas, and he being single without any army, got nervous and panicked. Here goes the conversion between Arjuna and Uttar

“Hey Brihannala, is this an army or sea? Nobody can even stand in front of such an overwhelming force. My bow is slipping from my shoulders – Bheesma, Drona, Kripacharya, Duryodhana, Aswathhama, Karna, Vikarna, Dushhashana … even Indra cannot fight these warriors, I am just an inexperienced prince with no battle experience. Let’s return, I don’t want to lose my life.

If you don’t have the courage to fight, you be my charioteer. I will fight the battle on behalf of you. I cannot run away from the battlefield, now please take the chariot towards that Shami tree.

Uttar reluctantly took the chariot towards a large tree where Brihannala requested him to climb the tree and bring him a bundle of weapons kept on top of the tree. Uttar followed Brihannala’s order and climbed the tree, discovered the bundle and came down with it.

This is the spear of King Yudhisthira. That is the mace of Bheema and this is his bow. This is “Gandiva”, the famous bow of Arjuna. And these are the swords of Nakula and Sahadeva.

If these weapons belong to Pandavas, why did they hid it on top of this tree? And where are they themselves?

Hey Uttar, what I am going to tell you now may move the earth beneath your feet. Hence, behold o great prince of Matsya, for I am the third son of Kunti, Dron sisya Arjuna. Kank is emperor Yudhisthira, Vallabh is Bheema, Granthika is Nakula and Tantipala is Sahadeva. Our beloved wife and queen of Indraprastha, Draupadi is Sairandhri – the assistant of your mother. We hid our weapons on the top of this tree before entering your kingdom, the kingdom of Matsya. We hid it here since we wanted to live like ordinary citizens and not Khastriyas.

If you are really Arjuna, tell me his 10 names with the meaning of each name. Also tell me in which context each name was given to him.

Sure o prince of Matsya. Here are my 10 names

Vijaya – I fight to win, the army on my side always wins. That’s why I am called “Vijaya” – the unvanquished.

Shwetarohana – The horses riding my chariot are white in color and can be identified from a distance. The invading army seeing the color of my horses, usually takes a step back.

Falguni: I was born on the breast of the Himavat on a day when the constellation Uttara Falguna was on the ascendent.

Kiriti: My father Indra gave me a beautiful crown when I was with him

Vibhatsu:  I am called Vibhatsu because I have fought all the battles by fair means

Sabyasachi: Both of my hands are capable of drawing the Gandiva at the same time with equal  skill and accuracy, hence I am sometimes called Sabyasachi.

Arjuna: They call me Arjuna because my complexion is very rare within the four boundaries of the earth and because also my acts are always stainless

Jishnu: I am triumphant, irreplacable, the destroyer of worlds.

Krishna: My tenth appellation, was given to me by my father out of affection towards his black-skinned boy of great purity. It also means that I am in the grace of Krishna, the Narayana and nobody can cause me harm without his permission.

My name is Bhuminjaya, and I am also called Uttar, the son of King Virat. It is by good luck, O Partha, that I behold thee. You are welcome, O Dhananjaya. You with red eyes, and arms that are mighty and each like unto the trunk of an elephant, please pardon me for what I have said to you from ignorance. And as wonderful and difficult have been the feats achieved by thee before, my fears have been dispelled, and indeed the love I bear to thee is great.

After this conversation Uttar submits himself to Arjuna and fights the battle as his charioteer. Arjuna goes ahead and defeats all the Kaurava warriors and returns to Matsya kingdom victorious.

Some of Arjuna’s other names were as follows