We have another reader question by Manish

Could you touch on the subject of Karma? The law of action and result? And how it actually works?. There is so many misinterpretation about it on the web. i would be really thankful you could write on it.

This is a very difficult question. I am no expert on Karma theory so this makes it even harder, one can go on and on with different logics and perspectives. But now that you have asked, I will try to offer some insights on what Indian schools believe.

Hence, karma is the means and not just the work itself. Let me illustrate this with a few examples

Karma is not merely “Work done”

As we can see, Karma is not work in its entire form. Karma is what comes as an effect when some work is performed by someone to achieve an objective.

People mistake work for Karma which is nothing but a misconception. Let’s take another example

Some immediate questions that follows

So here we see, Karma and fruit are independent of each other and mutually exclusive. It does not imply that Karma will always bear a fruit. Or there will always be a positive “Karman” for positive action (Kriya).

Theory of Causation – The Cause Effect Logic

The theory of causation is beautifully explained in Sankhya metaphysics. The specific questions of cause and effect can be summarized as

Does the ability to become an amazing Painter exist in a new born baby? Or is that effect produced in the subject through his effort?

There are two viewpoints and Indian logicians have explored both views equally.

A. Effect does not exist in the Entity and Depends on the Cause to Manifest itself

According to this view point, if the effect already existed in the material cause prior to production, then there is no sense of speaking of it as being caused or produced in any way. If the pot existed in the clay, why should the potter work so hard and use his skills to produce it? 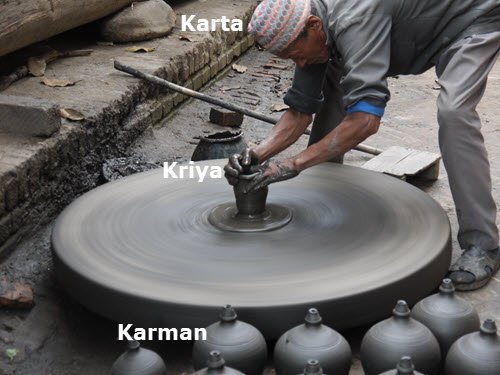 If the effect is already present in the material cause, it would logically follow that the effect is indistinguishable from the cause and that we should use the same name to address both effect and cause. That way the same purpose should be served by both the pot and a lump of clay, which is not the case in real life.

This theory is called “Asatkarya vada” – The Effect (Karman) is absent before Work (Kriya) is done.

B. The effect exists in the entity even before it is produced

Samkhya philosophy refutes this logic on the following grounds

Can any man turn blue into red? Can you turn sugar into salt? You can’t.

Can Lionel messi become as good in Chess as he is in Football? He can’t. This is because he carries a certain proportion of “Karman” related to Football within him and it is through his continuous “Kriya” he is able to bring it into existence.

There are people who are very educated on a discipline but don’t understand anything about the subject. This is because although they have put a lot of effort (Kriya) in something, the manifestation is not happening since the “Karman” is missing. If the Karman is not there in the first place, no amount of effort can produce and manifest a result.

This is the reason why not everyone can become a programmer, a writer, a musician, a thinker, a dancer, a teacher – regardless of the effort the subjects put into the pursuit of becoming something. Realization of Karman is necessary and only after the “Karman” is realized, the subject should align himself to that Karman and perform work that brings forth manifestation of the Karman.

Curd can only be obtained through milk and cloth can be made out of threads. This shows that an “effect” exists in the cause. Had it not been so, any effect could be produced from any cause just through “effort”, which is not the case in real life.

You cannot guarantee that you will be able to become a great poet just by studying literature for 50 years. You must contain that “Karman” inside you and if that is absent, you won’t make it.

So as we can see, the effect and the cause are essentially the same thing. If cause exists, the effect must also exist. The effect and the cause are implicit and explicit states of the same substance. A cloth is not really different from the threads it is made up of, the building is just a collection of bricks and humans are just a collection of thoughts and actions they have performed.

The conclusion drawn by the Sankhya is that the effect (Karman) exists in the cause (Karta) even before action is performed (Kriya). This is the theory of Satkarya Vada.

Whatever you have become in life is the result of the Karman that is already attached to your soul. The soul already has some potential and it carries that potential with it. When you are born, the potential is present, it is just that you are unaware of it. You either discover that potential or you die without discovering it but it is said that if a mind is inquisitive and it keeps digging, it will most definitely find it.

All great personalities started from Zero. They kept digging and eventually found the “Karman” inside them. The moment karman is realized, the soul gets busy in Kriya and the effect comes into existence. The same soul will fail miserably in another Karman, due to the absence of it.

The Karman gained in one life is not destroyed but it travels with the soul forever until eternity. So if you are a programmer in this life, it is possible that you were a logician in your previous life, or an accountant in some other life and that Karman has flowed to you in some way. This Karman will accrue inside the soul and in your next birth, it shall take another material form.

Some people are instantly addicted and attracted to something and spend all day doing it without getting tired. This happens because the soul has identified that Karman inside him and is doing the Kriya to manifest the Karman.